The Craziest Power Ranger Battle Ever 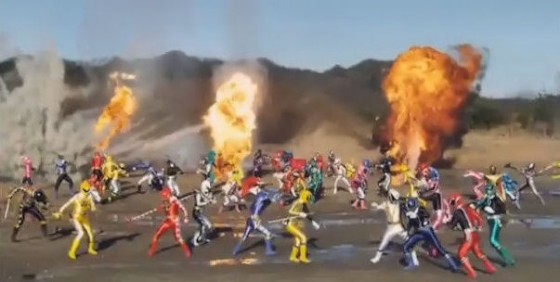 Normally, Lillian handles the TV stuff ’round these parts, but I think she can agree that the following can be allowed a little cross-pollination into random epic-ness. Mighty Morphin’ Power Rangers hit American TV by storm in 1993, and millions of kids suddenly wanted to learn martial arts and dress in matching hues.

It’s pretty common knowledge that the American series is actually a westernization of the Japanese show Super Sentai. What a lot of people don’t know is that the American series is actually only a small slice of the Super Sentai pie. Super Sentai has been going on since 1975 and is currently celebrating its 35th season. To celebrate the milestone, the premiere of Kaizoku Sentai Gokaiger featured what is probably the most awesomely insane Power Ranger battle ever in which all the prior Ranger teams showed up to lend a hand.

Yeah, that’s right: around 180 or so Rangers kickin’ tail all at the same time. Evil justed peed its pants.