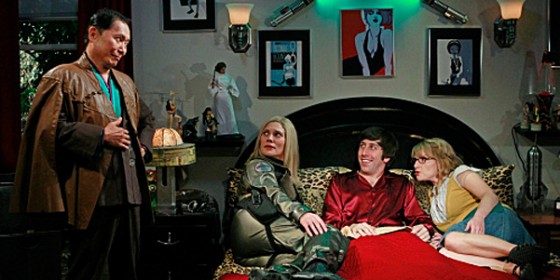 Geekgasm! Almost literally in Wolowitz’s case. Katee Sackhoff and George Takei guest star in tonight’s all new episode of CBS’ The Big Bang Theory. The two sci-fi stars play themselves in a rather interesting fantasy. Check out the promo and synopsis of “The Hot Troll Deviation” below:

An embarrassing secret of Wolowitz’s comes to light, while Sheldon (Jim Parsons) and Raj (Kunal Nayyar) have a small war at work on the next episode of The Big Bang Theory. Katee Sackhoff and George Takei guest star as themselves as Wolowitz’s love guides. Melissa Rauch Reprises Her Role as Howard’s Girlfriend, Bernadette.

The Big Bang Theory: Promo for “The Hot Troll Deviation”

Watch The Big Bang Theory on CBS, Thursdays at 8/7C.