Syfy Re-Enlists With DEFIANCE and DOMINION, New Seasons Ordered for Each 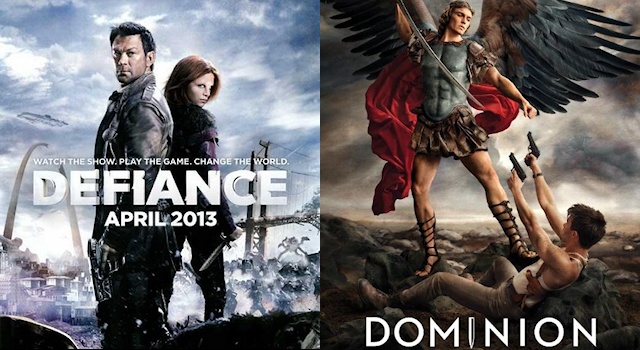 Oh how I love reporting good news. Today, Syfy has reinforced its commitment to its new and recent original scripted programming by renewing both the excellent Defiance and the newbie Dominion for third and second seasons, respectively. Each received a 13-episode order, which is basically a full season for this network, and each will retain its current showrunner. Both will return for their new seasons in 2015.

So glad Nolan and Irisa may not have to live out the rest of their lives underground. Whew! Here’s the full press release:

BOTH ORIGINAL DRAMAS SLATED TO RETURN IN 2015

NEW YORK – September 25, 2014 – Syfy today announced a third season for its original series Defiance, giving a 13-episode order to the action packed drama, and a second season for the epic supernatural thriller Dominion, which will also consist of 13 episodes. Both series are produced by Universal Cable Productions and are slated to return with all-new episodes in 2015.

Kevin Murphy (Desperate Housewives, Caprica, Hellcats) will resume his role as executive producer and showrunner of Defiance while Vaun Wilmott (Sons of Anarchy) will continue to fill the same posts for Dominion.

Season to date, Dominion and Defiance are the top two cable programs in the Thursday 8-10pm time period among P25-54s. With most current Live+7 data, both series are averaging 2.7 million total viewers, 1.2 million viewers 18-49 and 1.4 million viewers 25-54. Drawing an especially engaged social audience, Dominion was the most social drama on Thursdays across all of TV in tweets (15.4K) and tweets per unique (8.0).

Set in the near future, Defiance features an exotically transformed planet Earth, its landscapes permanently altered following the sudden – and tumultuous – arrival of seven unique alien races. In this somewhat unknown and unpredictable landscape, the richly diverse, newly-formed civilization of humans and aliens must learn to co-exist peacefully. Redefining the transmedia experience, Defiance has distinguished itself with an unprecedented partnership between Syfy and Trion Worlds, by creating the first-ever true convergence of television and online gaming.

Based on characters from the hit theatrical film Legion (2010), Dominion is an epic supernatural drama set in a transformed post–apocalyptic future, 25 years after an army of lower angels, assembled by the archangel Gabriel, waged a war of possession against mankind. The archangel Michael, turning against his own kind, chose to side with humanity. Rising out of the ashes, are newly fortified cities which protect the human survivors. In Vega (formerly Las Vegas), the largest of these cities, two houses vie for control over the people and the stage is set for political upheaval and a dangerous power shift. Meanwhile, a rebellious young soldier begins a perilous journey as the war escalates between the human race and the angels that are hell-bent on destroying humanity. Dominion is produced by Universal Cable Productions and Bold Films.

Syfy is a media destination for imagination-based entertainment. With year round acclaimed original series, events, blockbuster movies, classic science fiction and fantasy programming, a dynamic Web site (www.Syfy.com), and a portfolio of adjacent business (Syfy Ventures), Syfy is a passport to limitless possibilities. Originally launched in 1992 as SCI FI Channel, and currently in 96 million homes, Syfy is a network of NBCUniversal, one of the world’s leading media and entertainment companies. NBCUniversal is a subsidiary of Comcast Corporation. (Syfy. Imagine Greater.)