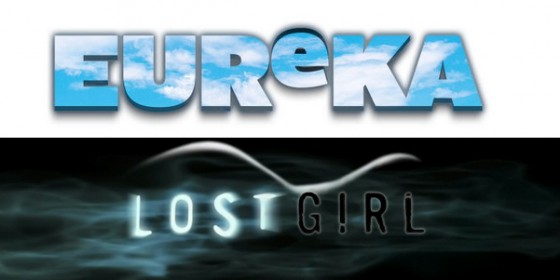 Ah Eureka. An early and continuing triumph for Syfy, beloved by the fans, now beginning its final season next Monday. Yes we are excited for the new season, just so sad to see it go. But HEY, we have been told that this will be the best season ever, that the stars and showrunner couldn’t be happier to go out with this particular season, so let’s celebrate! Just DON’T MISS THAT IT’S A NEW DAY AND TIME. MONDAYS AT 9/8c. Followed by…

Yes we know that the Lost Girl Season 1 finale was last night, but Syfy wisely decided to forge right ahead with Season 2 so that we US people could catch up with our Canadian friends. So bring it!

WARNING: This press release contains some spoilers about next week’s season openers for both shows.

MONDAY, APRIL 16 AT 9PM, FOLLOWED BY SECOND SEASON OF LOST GIRL AT 10PM

As Eureka’s thrilling fifth and final season kicks off, the town is reeling after the Astraeus and her crew mysteriously vanished just before their planned launch to Titan. When they finally crash land, Allison and the crewmembers are shocked to find themselves back in Eureka – and that they’ve been missing for four years. As the town copes with the shocking personal changes that have happened during their long absence, Sheriff Carter and Henry try to uncover the truth about the forces behind the crew’s bizarre disappearance – with deadly results.

In the Lost Girl season two opener, a nomadic Fae sideshow comes to town to take advantage of the chaos caused by both the bombing of the Light Fae headquarters and the declining physical condition of The Ash. Lost Girl stars Anna Silk as Bo, co-starring Kris Holden-Ried as Dyson; Ksenia Solo as Kenzi; Zoie Palmer as Lauren; Rick Howland as Trick, and K.C. Collins as Hale. Lost Girl is a Prodigy Pictures Production in association with Showcase. Executive producers are Jay Firestone, Michelle Lovretta and Peter Mohan. Lost Girl was created by Michelle Lovretta.