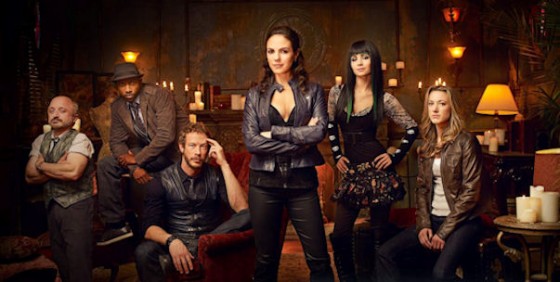 Hopefully you’ve been watching this really fun, entertaining supernatural show. If not, now’s the time to get going on that. Lost Girl brings us new supernatural creatures nearly every week as well as longer story arcs, some nice fight scenes, great cast chemistry, and lots of sex between pretty people. What’s not to like?

The series is produced in Canada and airs on Showcase there; Showcase and Syfy both announced the new season pickup yesterday. Unfortunately, while Canada is getting the next season in late 2013, we in the U.S. have to wait until 2014. Hopefully that isn’t set in stone…

Anna Silk (Being Erica) stars as seductress Bo, a Succubus (a powerful female entity in folklore) who feeds off sexual energy. Bo is one of the Fae, creatures of legend who pass as humans. Faced with choosing between an allegiance to the Dark or Light Fae clans, Bo takes the middle path between the human and Fae worlds while embarking on a mission to unlock the secrets of her origin.

Lost Girl was developed by Prodigy Pictures, in association with Shaw Media and Showcase. Executive producers are Jay Firestone and Emily Andras. Vanessa Piazza is producer. Produced by Wendy Grean.

Syfy is a media destination for imagination-based entertainment. With year round acclaimed original series, events, blockbuster movies, classic science fiction and fantasy programming, a dynamic Web site (www.Syfy.com), and a portfolio of adjacent business (Syfy Ventures), Syfy is a passport to limitless possibilities. Originally launched in 1992 as SCI FI Channel, and currently in more than 98 million homes, Syfy is a network of NBCUniversal, one of the world’s leading media and entertainment companies. (Syfy. Imagine greater.)

Founded in 2006 by Jay Firestone and later joined by Producer Vanessa Piazza, Prodigy Pictures leads the way in the production of quality film, television and cross-platform media. Prodigy is responsible for the critically acclaimed television series Lost Girl, which has electrified viewers around the world and has amassed a loyal following. Lost Girl is currently airing its third season on Showcase in Canada and Syfy Channel in the U.S. Prodigy’s other credits include the thriller Stuck, as well as the original television mini-series XIII and XIII: The Series.

Prodigy has several projects in development, including the dramatic fantasy series Bedtime Stories and the sci-fi series Dark Matter. Features in development include the adaptation of William Gibson’s groundbreaking and award winning sci-fi novel, Neuromancer, and an adaptation of Monkey’s Paw.

This announcement also confirms what we suspected earlier this week when the Warehouse 13 midseason premiere was announced; that the Lost Girl season finale will air following episode two of Defiance, after being preempted the week before by Defiance‘s two-hour series premiere. Mark your calendars, kids!