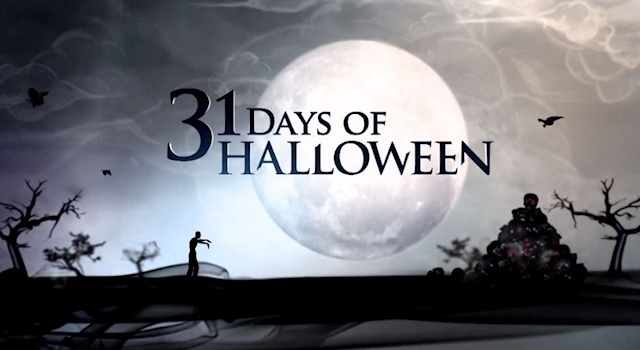 If you’re like me, you could look around your home at any time of year and realize that, with all the sci-fi collectibles around, not to mention what’s usually on your TV screen, you’re always decorated for Halloween. A similar thing could be said of Syfy; doesn’t its programming mean it’s always sorta celebrating Halloween? Nevertheless, there’s something extra special about the month of October, and we’re happy to help them promote their annual “31 Days of Halloween Spookathon” programming.

This year the celebration will see the return of Ghost Hunters, the continuation of Haven and Z Nation, the premiere of docuseries Town of the Living Dead, three new Original Movies, and the Syfy premiere of Shutter and the remake of The Texas Chainsaw Massacre.

Check out the TV spot, then all the deets:

Among the blood-curdling theatrical movie premieres airing during this year’s scarefest are Shutter (October 5) and the remake of The Texas Chainsaw Massacre (October 11).

Syfy’s new series Z Nation, about a band of everyday heroes transporting the only known survivor of a zombie plague to California, where the last functioning viral lab waits for his blood, continues its first season Fridays at 10PM (ET/PT). Z Nation stars Harold Perrineau (Oz, Lost) and Tom Everett Scott (Southland, Beauty and the Beast)

DARK HAUL – Original Movie Premieres Saturday, October 4 at 9PM – A team of secretive guardians transport a deadly creature and its half-human sister to a secure location, but the beast escapes and threatens to fulfill a prophecy – by destroying the world. Dark Haul stars Tom Sizemore (Saving Private Ryan, Black Hawk Down), Rick Ravanello (The Cave, Hart’s War) and Evalena Marie (Remains, Serena and the Ratts). Dark Haul is a production of Synthetic Cinema International.

TOWN OF THE LIVING DEAD – Original Series Premieres Tuesday, October 7 at 10PM – The colorful folks of Jasper, Alabama are determined, once and for all, to complete their zombie movie, Thr33 Days Dead… now six long years in the making. Based on a town urban legend, their film centers on a group of friends trying to survive a zombie apocalypse in rural Alabama. The series will follow the intrepid and motley crew of amateur filmmakers as they struggle against every obstacle imaginable to get to a final cut of their film…which could someday become a Syfy movie. The production company is True Entertainment (The Real Housewives of Atlanta, Season 25: Oprah Behind the Scenes). Executive producers are Glenda Hersh, Steven Weinstock, David Stefanou, Todd Hurvitz, Tony Biancosino and Cherie Kloss.

Syfy is a media destination for imagination-based entertainment. With year round acclaimed original series, events, blockbuster movies, classic science fiction and fantasy programming, a dynamic Web site (www.Syfy.com), and a portfolio of adjacent business (Syfy Ventures), Syfy is a passport to limitless possibilities. Originally launched in 1992 as SCI FI Channel, and currently in 96 million homes, Syfy is a network of NBCUniversal, one of the world’s leading media and entertainment companies. NBCUniversal is a subsidiary of Comcast Corporation.(Syfy. Imagine Greater.)