SUPERMAN: Zack Snyder and Diane Lane Talk About the Man of Steel 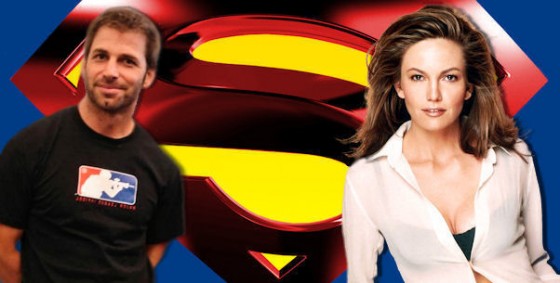 Back at the beginning of this month, Warner Bros. Pictures and Legendary Pictures announced that Diane Lane (Secretariat, Cinema Verite) had officially been cast in director Zack Snyder‘s (Sucker Punch) forthcoming Superman film.

While recently speaking with with the LATimes, director Zack Snyder (Sucker Punch) said we shouldn’t expect his Superman to be tied to any of the previous films:

“Literally, the one thing that everyone can start to think about is that we’re making a movie that finally goes with the approach that there’s been no other Superman movies,” Snyder said. “If you look at ‘Batman Begins,’ there’s that structure, there’s the canon that we know about and respect but on other hand there’s this approach that pre-supposes that there haven’t been any other movies.  In every aspect of design and of story, the whole thing is very much from that perspective of respect the canon but don’t be a slave to the movies.”

Snyder was then asked that if he thought,  in hindsight that Bryan Singer‘s film, Superman Returns may have been too careful in its attempt to approach the iconic character because of its extensive history. Snyder said,

“Yeah, and we’re not afraid of that at all. “Our Superman, he’s got things to figure out but he’s a physical cat.”

Snyder then opined about the awesomeness of Superman:

“Superman is the one constant in the universe,” Snyder said. “You know that if you do Superman right — or at least if you do him with respect — you know you end up with something great…. [but] in some ways [beyond] that is virgin territory. No one knows what that is. In some ways Superman is the most recognizable superhero on the planet but also the most unknown. Just what he can be? People have preconceived ideas about him but probably all of them are wrong.”

When asked for details about the costume that Henry Cavill will wear in the film – Snyder said,

”I can’t say — although I appreciate the question. I’d love to talk about it. We’re going to have to show it before we shoot, probably a while before that because [otherwise] someone will be on the set and get a picture of it.”

Snyder then spoke about the enormous pressure that goes with getting his Superman film off the ground:

Included in the interview with Snyder was a comment about the possible title of the film:

“The filmmaker is in intense preparations now for the Superman revival (it will likely be titled “Man of Steel” but that decision isn’t final yet).”

In other Superman news…

The new Martha Kent, Diane Lane recently spoke with USAWeekend and said that she recently watched Watchmen, again to remind herself “of what an audacious, brilliant man Zack Snyder is, I love 300 and I’m very flattered to play Martha Kent and live up to his vision. It’s pretty cool.”

“I’ve always wanted to raise a good man. I thought that was the biggest challenge a woman could have, and so I get the embarrassment of riches.”

Lane summed it up eloquently by saying,

“It’s going to be a wild ride”

Superman ( aka Superman: Man of Steel ) is slated to hit theaters in December of 2012.