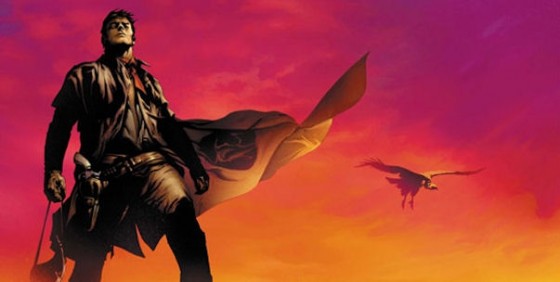 In 1982 Stephen King rocked the very foundations of modern storytelling with the following words:

“The man in black fled across the desert, and the Gunslinger followed.”

That is the first sentence of King’s magnum opus, The Dark Tower, a saga that spans 7 novels, and ties in with just about every single book King has ever written. It’s a story that took 22 years to tell, and since it’s completion has inspired several graphic novels as well as an upcoming film adaptation by producer/director Ron Howard.

It has been 7 years since the journey of Roland, the last gunslinger of Gilead and his Ka-tet ended, and today King has announced that he would like to return to Mid-World in a novel titled The Wind Through the Keyhole. The story will take place between books 4 and 5 of the series and King promises that we will get to learn a lot about Mid-World we didn’t imagine. In the official press release from his site King says:

At some point, while worrying over the copyedited manuscript of the next book (11/22/63, out November 8th), I started thinking—and dreaming—about Mid-World again. The major story of Roland and his ka-tet was told, but I realized there was at least one hole in the narrative progression: what happened to Roland, Jake, Eddie, Susannah, and Oy between the time they leave the Emerald City (the end of Wizard and Glass) and the time we pick them up again, on the outskirts of Calla Bryn Sturgis (the beginning of Wolves of the Calla)?

There was a storm, I decided. One of sudden and vicious intensity. The kind to which billy-bumblers like Oy are particularly susceptible. Little by little, a story began to take shape. I saw a line of riders, one of them Roland’s old mate, Jamie DeCurry, emerging from clouds of alkali dust thrown by a high wind. I saw a severed head on a fencepost. I saw a swamp full of dangers and terrors. I saw just enough to want to see the rest. Long story short, I went back to visit an-tet with my friends for awhile. The result is a novel called The Wind Through the Keyhole. It’s finished, and I expect it will be published next year.

It won’t tell you much that’s new about Roland and his friends, but there’s a lot none of us knew about Mid-World, both past and present. The novel is shorter than DT 2-7, but quite a bit longer than the first volume—call this one DT-4.5. It’s not going to change anybody’s life, but God, I had fun.

I’m sure fans will have as much fun reading it. I know I will.