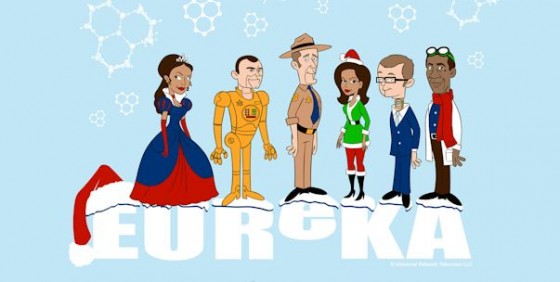 How much do we love composer Bear McCreary? He has composed some of our favorite soundtracks – The Walking Dead, Battlestar Galactica, and – Eureka! We miss Eureka very much already, though it’s only been gone a few months, but fortunately we can still celebrate it with good cheer, thanks to the release of the soundtrack to the two Eureka Christmas specials:

BACK LOT MUSIC TO RELEASE A VERY EUREKA CHRISTMAS SOUNDTRACK

(November 19, 2012 – Los Angeles, CA) Back Lot Music will release A Very Eureka Christmas digitally on November 20th and through other digital music outlets later in the month. The album features composer Bear McCreary’s (The Walking Dead, Battlestar Galactica) score for the two beloved Christmas episodes of the Syfy series Eureka: “O Little Town” and “Do You See What I See.” 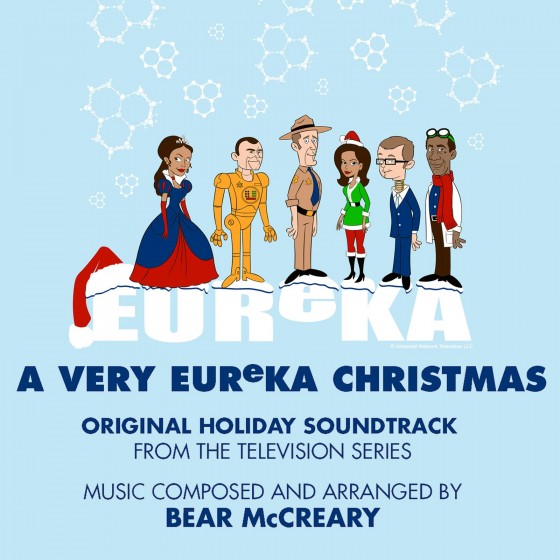 Said series co-creator Jaime Paglia, “We hoped our holiday episodes would become perennial favorites for Eureka fans. Getting to release a holiday soundtrack is like finding an extra present under the tree. Please enjoy responsibly.”

ABOUT O LITTLE TOWN (originally aired December, 2010)
On Eureka, as the Global Dynamics employees celebrate the season at the company holiday party, staff member Dr. Noah Drummer (guest star Chris Parnell) nearly absconds with a volatile experiment. The halls get seriously decked when Dr. Drummer’s unstable hydrogen crystal starts to grow at a frightening rate. Carter (Colin Ferguson) and Henry (Joe Morton) attempt to deal with the potentially explosive crystal, but before long the true scope of the problem is revealed, and it will take more than tinsel and carolers to save Christmas and Eureka. Former series regular Matt Frewer also returns as Taggert.

“When I first watched the episode with producers Jaime Paglia, Bruce Miller and Todd Sharp, we knew right away this one was special and would require a unique approach,” said McCreary. Bear brought in an orchestra to perform, and a special vocalist – Raya Yarbrough.

“Raya just has a fantastic, distinctive voice,” Paglia said. “When Bear said she was interested in recording a song for our Christmas episode, it didn’t take much convincing.”

“In addition to performing the songs and in the score cues, Raya joined me in singing my ‘Christmas Caroler, arrangement of Mark Mothersbaugh’s theme song,” McCreary described. “Melded with the hilarious holiday imagery, this main title absolutely cracks me up. I wish they’d use it for every episode.”

ABOUT DO YOU SEE WHAT I SEE (originally aired December, 2011)
Sheriff Carter (Colin Ferguson) and Allison Blake (Salli Richardson-Whitfield) are secretly planning the perfect holiday surprise for their kids. But a mysterious kaleidoscopic wave of color crashes over Eureka, leaving the entire town and its inhabitants animated.

“Do You See What I See? certainly raised the stakes visually compared to last year’s special,” McCreary explained. “The episode features four distinct styles of contemporary and classic animation. When writing the music, I had to measure up to the exciting imagery, match each style with a distinct musical style, infuse every cue with holiday instrumentation and various Christmas carols and do it all while still preserving my quirky, signature Eureka sound.”

Raya also contributed to this episode. McCreary would again weave multiple holiday songs together with his own material. “Toward the end of the episode, the orchestra quotes a beautiful, lush arrangement of Allison’s Theme, which is followed by ‘Jingle Bells’ in the muted trumpets and celeste, then sung again by Raya,” McCreary described. After that, the chimes and woodwinds quote ‘Carol of the Bells’, and Raya returns to offer a final solo statement of ‘Do You See What I See?’”

ABOUT BEAR MCCREARY
Bear McCreary’s unique combination of atypical instrumental background (he is a professional accordionist) with rigorous classical training prepared him to compose for disparate genres. By the age of 24, McCreary was launched into pop culture history with his groundbreaking score to SyFy’s hit series Battlestar Galactica, for which he composed “the most innovative music on TV today” (Variety). It “fits the action so perfectly, it’s almost devastating: a sci-fi score like no other” (NPR). Io9.com declared Bear McCreary one of the Ten Best Science Fiction Composers of all time, listing him alongside legends John Williams, Jerry Goldsmith and Bernard Herrmann.

McCreary continues to write for the television show The Walking Dead. In 2013 he will lend his talents to SyFy and Trion World’s groundbreaking entertainment experience, Defiance, a combined launch of a MMO videogame and television series and DaVinci’s Demons for STARZ. His upcoming film projects include The Europa Report and The Knights of Badassdom. His other credits include critically acclaimed scores for series such as Terminator: The Sarah Connor Chronicles, Caprica, and The Cape. His swashbuckling score for Human Target featured the largest orchestra ever assembled in the history of series television and earned him his first Emmy nomination. His feature film work includes Disney’s Step Up 3D and Chillerama, and his videogame credits include SOCOM 4 and Dark Void.

ABOUT EUREKA
Eureka seems like any other cozy, Pacific Northwest town, but is actually a secret community of geniuses assembled by the government to conduct top-secret research. What they’ve unwittingly created is a place where anything imaginable can happen — and does.

Co-creator Jaime Paglia, Bruce Miller and Todd Sharp are the executive producers. The series is produced by Universal Cable Productions. The series aired on Syfy from July 2006 until July 2012.

This is a really fun soundtrack, and may end up being an apt one for your holiday life – especially if you find yourself involved in an anime battle, or being chased by something sinister. How fun! There are traditional Christmas songs woven in, as well as a familiar theme from a quirky little hidden town that isn’t Bethlehem.

You can download A Very Eureka Christmas Soundtrack from iTunes here; individual tracks are $.99 and the entire 23-track album is $9.99.