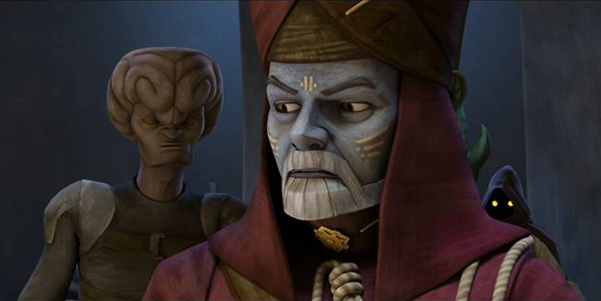 Tomorrow night’s episode of Star Wars: The Clone Wars takes you into the life of Pantoran Chairman Papanioda, the character of that series creator George Lucas played in Episode III: Revenge of the Sith. In Episode III, the Chairman is only a background character, but the beauty of Clone Wars is the ability to expand upon any and all aspects of the Star Wars universe.

Lucas wore blue face paint for his cameo in Episode III. Here, he talks about why he finally made an appearance in the Star Wars films:

“My appearance in Episode III was just for fun. Mostly, I did it for my kids. I was wrapping the series, and I’d never been on-screen in a Star Wars film, even though I’d been making them for decades. With The Clone Wars, I get the best of both worlds, because I get a starring role but don’t have to do any acting or wear any blue make-up.”

Lucas’ children, Amanda, Katie, and Jett, also make an appearance in this episode of Clone Wars. Though the Lucas family did not lend their voices for the episode, you can’t complain about who was cast in their stead: Seth Green (Family Guy: It’s A Trap, Robot Chicken) voices Jett’s character, Meredith Salenger (also the voice of Barriss Offee) voices Amanda’s character, Nika Futerman (also Asajj Ventress) plays Katie’s, and George’s Papanoida character is given voice by Corey Burton (also Count Dooku, Cad Bane).

“We actually made Papanoida into kind of an action hero. The bad guys have his family, and he goes after them, blasters blazing. Shoot first, ask questions later. His character is very focused on finding and protecting his kids; it’s a desperate situation, and he steps up. It’s a fun episode with a lot of action – and it’s unique, in that our normal heroes give up the spotlight while Papanoida takes matters into his own hands. This was a surreal episode to produce, since the guy on screen was sitting right next to me while we were making it.”

Sounds like George Lucas is going all Taken on this episode of Clone Wars! Check out the episode synopsis and sneak peek below:

When Pantoran Chairman Papanoida’s family is kidnapped and held for ransom, Ahsoka Tano must team up with Senator Riyo Chuchi to aid the new chairman in recovering his family. It’s a journey deep into the dark underbelly of the Coruscant crime scene, with an unlikely – and immediately recognizable – protagonist painted into a corner and forced into action in “Sphere of Influence,” an all-new episode of Star Wars: The Clone Wars – airing at 9:00 p.m. ET/PT Friday, October 1 on Cartoon Network.