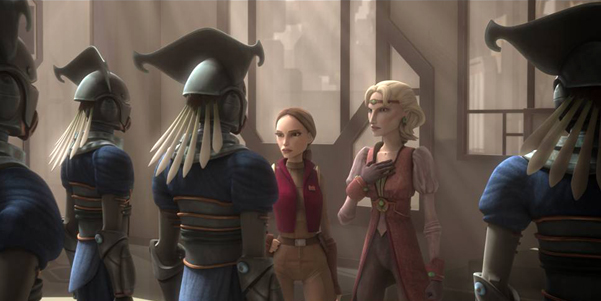 Tonight on an all new Star Wars: The Clone Wars, Senator Padme Amidala discovers a sinister plot that would threaten peace on the pacifist planet, Mandalore. Aided by Duchess Satine, Amidala links a mysterious illness with the children on the planet with government corruption. Check out the press release and sneak peek for tonight’s episode entitled “Corruption” below:

“Corruption” explores a system divided. Deep in the midst of an identity crisis made even worse by the widespread turmoil of the Clone Wars, the people of Mandalore find themselves torn between their violent past and their leader’s promise of peace for the future.

“It’s a fascinating culture at a really interesting time,” says Dave Filoni, Supervising Director of Star Wars: The Clone Wars. “Mandalore has a long history of violence, and they’re trying to move away from that. But this is all taking place in the middle of a galaxy-wide civil war, so it’s difficult for Satine to make a case for peace when there’s so much violence all around. And that’s exactly why peace is so important to her.”

While Season Two’s visit to Mandalore saw the schism reflected in the explicit aggression of the Death Watch, the latest plot indicates a far more subversive threat – reaching into the highest echelons of the Mandalorian power hierarchy.

“There are bigger threats to peace than the Death Watch,” says Filoni. “We’ve seen their approach in Season Two; they used violence as their message. But political corruption can be far more damaging in the long run. The scale’s so much broader here, and the stakes are system-wide. Ultimately, Mandalore’s allegiances are key to the Clone Wars, so every little transgression can have ripple effects throughout the war. Corruption can spread, and it’s threatening to poison Satine’s best efforts.”

Without the explosive threats of the Death Watch, the story necessarily takes an altogether different tone. Teamed with Padmé for the investigation Satine sets out to uncover the threat to her power – and to Mandalore’s peaceful future. Though they come under fire as the investigation heats up, the two women face dangers with far-reaching consequences even greater than mere threats to their own personal well-being.

“Whenever we visit Satine, we’re going to see a war of ideals,” says Filoni. “She’s very steadfast in her beliefs, and that’s what makes her a good leader. She’s got a tough job, though. She is often undermined by her own people, and her core beliefs are even at odds with the beliefs of the other Clone Wars heroes – including the Jedi and the Senate. Ultimately, they all want the same thing – peace – but they have different thresholds. With an endgame that is so important to the entire galaxy, compromises can be difficult – even when it comes to the means by which peace is achieved.”