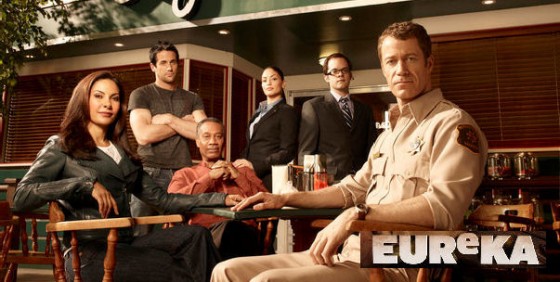 Colin Ferguson, who plays Sheriff Jack Carter in Syfy‘s Eureka, and showrunner Jaime Paglia, recently took some time to speak with the press about the last season of their show, which premieres Monday. I took the opportunity to ask them if the series finale will mean the absolute end of the show, or if there is a possibility of future specials or movies.

Colin Ferguson: My death scene is one of the most moving death scenes you’re ever going to see.

SciFi Mafia: (laughing) But it’s sci-fi, so you can come back, right?

Colin Ferguson: (laughing) Exactly. No, there’s no death scene. Jamie, how about you take it?

Jamie Paglia: There are no plans right now for that. I think that the realities of having taken down all of our sets would make that definitely challenging. There have been discussions about potentially doing a spin-off to the franchise, and I’m open to that and the network is certainly open to that.

I’m not pursuing it right at the moment, mostly because I think everybody probably wants to just feel some resolution with this series before we’re off to the next one. So I certainly would not say that it’s definitively over and that we couldn’t do another either spin-off or actually shoot it as a movie, and we could use different sets and then that would help with that aspect of it, but no hard plans at the moment.

And it would be really hard, because we eviscerated Carter in that last episode, so it’s…

I still think, though, that we could do like a – like the team goes elsewhere. The team is called to Chicago, because there’s a problem in Chicago.  That [could] definitely get done as a movie. I’d love to do that, like some sort of two-hour thing. That’d be fun to do.

Jamie Paglia: Yes, and that’s one of the other possibilities; there’ve been lots of people who have talked about that. So I think that that would be…

Colin Ferguson: What am I thinking? No, there’s a horrible problem in the Bahamas. That’s where the problem is.

Jamie Paglia: In the Bahamas. Or Hawaii.

Jamie Paglia: Okay, yes. All of Colin’s favorite destination spots are going to somehow make it into the storyline.

SciFi Mafia: Well we’ll definitely watch for that, so thanks very much, guys.

That would be so great.

In the much nearer future, they confirmed that they’re going to Phoenix Comic Con over Memorial Day weekend, and Dragon Con, and Jaime Paglia added that “I’m hoping all of you can throw in your urging that we would love to have a swan song at San Diego Comic Con this year to say goodbye.” LET’S DO THIS! COME ON, SYFY, COMIC-CON NEEDS EUREKA!!!

We’ll have more of the interview later this week. Thanks so much to Colin Ferguson and Jamie Paglia for taking the time to talk with us.