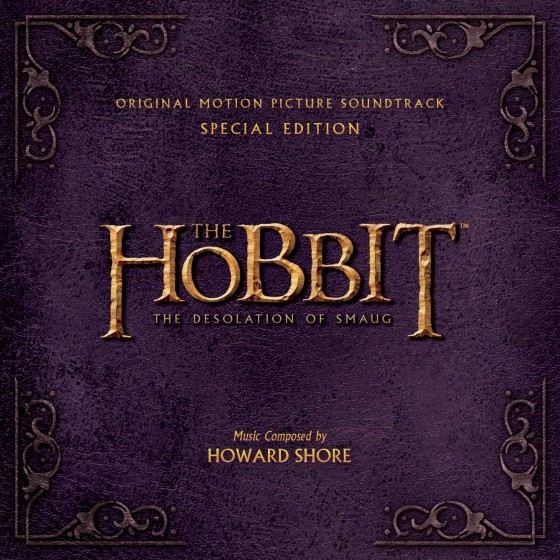 Summary: WaterTower Music has released the soundtrack to “The Hobbit: The Desolation of Smaug,” a production of New Line Cinema and Metro-Goldwyn-Mayer Pictures (MGM), the second in a trilogy of films by Academy Award®-winning filmmaker Peter Jackson adapting the enduringly popular masterpiece The Hobbit, by J.R.R. Tolkien. The soundtrack is available both digitally and as a 2 CD set. A Special Edition soundtrack, featuring twelve extended tracks, a bonus track, expanded liner notes and interactive sheet music is also available.

The Hobbit: The Desolation of Smaug Original Motion Picture Soundtrack features the music of Howard Shore, one of film music’s most respected, honored, and active composers and conductors. “I’m looking forward to introducing you to Smaug,” exclaimed Shore, who previously worked with director Peter Jackson on The Lord of the Rings Trilogy and on The Hobbit: An Unexpected Journey. Jackson added, “Howard Shore’s music soars and enriches way beyond its connection to our images, a unique sound like no other.  He truly has created an epic musical world of his own.”

Included on the soundtrack is I See Fire, a new song created for the film by Ed Sheeran, the 22-year old British singer/songwriter and multi-platinum global phenomenon who was nominated in the prestigious “Song of the Year” category at this year’s 55th Annual Grammy Awards. Sheeran is also a two-time BRIT Award winner and recipient of the highly esteemed Ivor Novello award for best song musically and lyrically in the UK.” “It was such an honor working with Peter Jackson on this song,” Sheeran says.  “Not only is he one of my favorite directors of my favorite films, The Hobbit was the first book I ever read as a child, so it means a lot that I get to produce music for the motion picture.”

First, a reassurance that this review does not spoil the movie. Comments about the music as it supports specific scenes doesn’t go much further than the screenshots posted while we waited for the release of the film. Still, go see the movie if you haven’t yet, because yes, it is that good.

This soundtrack clearly sets and captures a different mood from its predecessor, the soundtrack for The Hobbit: An Unexpected Journey. Creepier. More forboding. More menacing. But easily as wonderful. “Mirkwood” and “Flies and Spiders” are just downright scary. All of this would have been too dark for the first movie, but is absolutely perfect for this second of the trilogy. While nowhere near as dark as the second film in the Lord of the Rings trilogy, it is similarly more relentlessly dark and scary and action-oriented than the first Hobbit movie. Smaug is terrifying, to be sure, but he is no Sauron.

There is therefore nothing bucolic or restful or soothing about this soundtrack. The only tracks you can listen to with a headache are Ed Sheeran‘s song “I See Fire”, the penultimate track, and the final track, “Beyond the Forest”, which is my favorite because it is purely beautiful. But if you don’t have a headache, this is one gorgeous soundtrack through and through. It is rich and dense and full,  and never sappy or easy or overdone. Howard Shore is clearly one of the most talented soundtrack composers of our day. Few if any people could approach his level of understanding of what is required for the Middle-earth movies, and he is clearly the master.

While the tracks can stand alone, and generally don’t awkwardly cut off as they do in some other soundtrack recordings, they do sometimes just quickly taper off. Clearly these discs were meant to be played as one continuous piece. In fact, Peter Jackson reports in his introduction, included in the soundtrack booklet, that Howard Shore “truly has created an epic musical world of his own. A unique sound like no other. A year from now, we will be able to listen to well over 20 hours of musical story telling, that starts with An Unexpected Journey, and concludes with The Return of the King. That is Howard’s genius – he is carefully shaping this 6 part epic score as a fully unified narrative.”

Even if you have no musical training or background, you’ll be able to recognize snippets of themes and styles from the Lord of the Rings and first Hobbit movies. But if you do have training and are interested in a more theory-oriented discussion, the booklet included in this Extended Edition has a lengthy one by Doug Adams, this time including bits of the actual written music to illuminate the examination. Be forewarned, however, that the musical discussion in the booklet is tied to a discussion of elements of the movie, so you’ll need to skip that if for some horrible reason you own the soundtrack before you’ve seen the film.

Also included in the booklet are some absolutely gorgeous screenshots, a page from the score for one of the tracks, and a description by Peter Jackson of the concert hall where the recording was made. Yes, other than the vocals and the Ed Sheeran track, this soundtrack was recorded in a concert hall. It may be that I was influenced by knowing that ahead of time, but I could swear that you can almost hear the air in the hall as you listen to this recording. It is not unlike listening to an LP but with no pops. It somehow works wonderfully with the urgency of the score, making it more vibrant and visceral.

The final “bonus” of the Extended Edition is the video for the recording of “I See Fire”. It is accessed when you scan the cover of the booklet with the free downloadable WaterTower app. It’s a nice addition. Ostensibly other things are accessible through the app but I had difficulty finding them, probably because of the inescapable glare in my home.

A quick note about the Sheeran song: though I have a special love for last year’s “Song of the Lonely Mountain”, “I See Fire” is quite lovely and happily not at all whiny as I feared it might be, as so many movie “songs” are. It’s equally as perfect for the movie and as a standalone song as its predecessor. I might even prefer the new one.

And also a quick note about the final track, my favorite. Shore has found a way to include nonverbal vocals – you know, “ahh”s and “oooo”s – that does not make me roll my eyes, unlike a favorite TV soundtrack composer whose work I love except for his painful use of soprano “ooo”s. A composer who writes for a Doctor. I dread the large moments of his work, when I know I’m gonna be hearing that over-the-top vocal. In Shore’s hands, on the final track of this set, the vocals are perfect, subtle, not cloy, not melodramatic. Just beautiful.

Here is a list of the tracks, with a notation as to those that are exclusive to the Extended Edition:

Unless you are on a severely restricted budget, the Extended Edition is clearly the worthwhile choice.

I have only two minor issues with this set; one with one track, the other with one tiny aspect of the booklet. The tracks “Smaug” and “My Armor is Iron” are wonderful but don’t exactly capture the essence of what I remember. The music in the movie was perfect, but in this recording just ever so slightly misses the excitement.

The booklet issue is a tiny one, but I just can’t let it go. Of all the times that the contraction “it’s” is used in Peter Jackson‘s lengthy introduction, and it is used repeatedly, only once is it used correctly. All the other times it should have been the possessive, “its”. It’s simple, it’s minor, but it’s not unlike a repeatedly misspelled word. It’s embarrassing. Thank you, I think I can move on now.

It would be easy enough for Howard Shore to have remixed the many themes he has created for Middle-earth to try to retrofit them for this second Hobbit movie, but he does no such thing. Although it is somewhat reminiscent, and necessarily so, of his previous work on the Lord of the Rings and first Hobbit movies, this soundtrack is absolutely new and strictly tailored for the scenes, storylines, characters, and themes of The Hobbit: The Desolation of Smaug.

For all lovers of soundtracks, lovers of Howard Shore music, lovers of the Hobbit movies, and/or lovers of beautiful, complex, original symphonic music, here is the best gift to yourself.

I give The Hobbit: The Desolation of Smaug Original Motion Picture Soundtrack Special Edition Five Out of Five Stars.