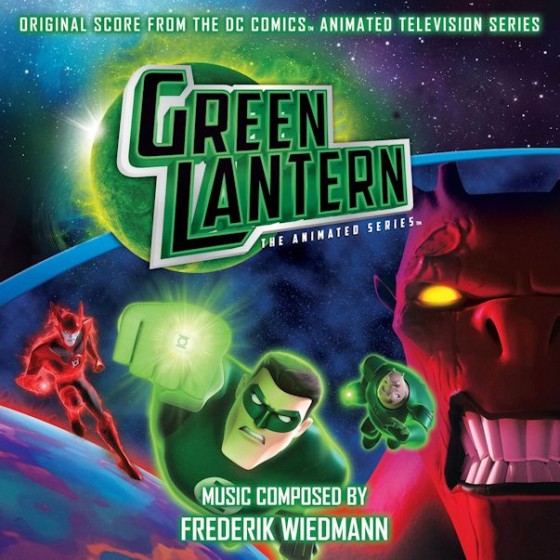 Based upon the DC Comics super hero, Green Lantern: The Animated Series follows Earth’s Green Lantern, Hal Jordan, who is used to being in dangerous situations — but he’s never faced anything like this! Set in the farthest reaches of deep space, the series finds Hal on the Guardian Frontier, where he must face down an invasion from the Red Lantern Corps.

“The score for the Green Lantern series is a big and epic orchestral score, filled with themes and world instruments,” said Wiedmann. “Since most of the story takes place in space, the musical possibilities are endless.  I get to write a blend of sci-fi, heroic action, adventure, utilizing all kinds of worldly instruments. It is a rare opportunity for a composer to have this much variety in creating music for one project.”

Born in Stuttgart, Germany, Frederik Wiedmann came to Los Angeles in 2004 to become a film composer. After three years working as an assistant to veteran composer John Frizzell, Wiedmann scored his first feature Return to House on Haunted Hill for Dark Castle Entertainment (Warner Brothers) in 2007.

Wiedmann is also teaching a music technology course in the highly acclaimed Scoring for Motion Pictures and TV graduate program at USC, where he is sharing is extensive knowledge of music production and writing music for the movies.

Epic. Exactly. I’ve reviewed a variety of soundtracks this year, but they seem to have fallen into what I think of as one of three categories: ambient, arresting, and classic soundtrack. The ambient soundtrack, quiet and open, is wonderful to have on for your beautiful background music as you go throughout your day. The arresting soundtrack, big and orchestral and dense and challenging, is something that demands you just sit and listen.  The classic soundtrack informs what you are doing, just as it does for whatever movie or show or game for which it was written. If you are listening to the Dark Shadows Original Score, everything you do takes on a slightly creepy and sinister overtone.

Green Lantern: The Animated Series Original Soundtrack is the classic soundtrack type, and will make your every decision epic. Put this on your portable listening device and a quick trip to the grocery store becomes The Quest for the Flour. Doing the laundry becomes The Battle of the Washing Machine Dragon. You in your tee shirt and shorts become a lovely lass or gallant lad taking respite upon yon couch. Yon Venutian couch, if you prefer, because this works equally well whether you prefer your fantasy life to be Intrepid You the Conqueror of Middle Earth or Intrepid You of Klingon Lore, or anything equally epic. It will raise the level of the day.

Just as it was meant to do for the series in which it plays its part. Green Lantern: The Animated Series is the type of cartoon that would generally be considered acceptable for children of 7 or 8 or potentially even younger, which is emphatically not to say that it should be restricted to that. I really enjoy the series. The animation is stylized with a CG look, and is saturated with color. The voices are suited to the characters, and the writing is somewhat simple but not babyish. Hal Jordan does have snark.

But if you just watched it without the music it could seem a bit less sophisticated. With this huge, orchestral, beautiful, dramatic and triumphant soundtrack, the level of the series is absolutely raised. Everything is bigger, more serious, more, well, epic. After all, entire planets and civilizations are affecting and affected by the Green Lanterns. Red Lanterns are fueled by hate. These are big things, and warrant a big score.

The other aspect of this score that makes it a great personal-soundtrack choice is that each of the tracks are relatively short, ideal for the gnat-sized attention span of people like me. In fact every one of the 36 tracks is less than 4 minutes long, which explains the high number of tracks. And they each stand alone, unlike some soundtrack cds in which the separation is in name and number only. If your personal legendary tale ends when your car pulls into the driveway, you’re not stuck having to wait interminably while the music continues on. It’s really perfect.

Listen a few more times and you may start to be able to pick out a few themes. In this soundtrack, Wiedmann introduces themes for each character which wind their way in and out of these brief pieces exquisitely, developing as the disc progresses. So while I call this a “classic soundtrack” type of disc, it is really worth your while to simply sit and listen. It is gorgeous, and rich, and textured, and glorious.

The cd comes with a lovely 12-page full color booklet that includes screen shots from the show, an introduction from the composer, and another from Giancarlo Volpe, a producer of the series.

If you are already a fan of Green Lantern: The Animated Series then you know how lush and legendary the soundtrack is, so treat yourself to more with this cd. If you aren’t familiar with the series but have a soft spot for the heroic in your fiction, your music, and/or your life, get this cd.

I give Green Lantern: The Animated Series Original Soundtrack Five Out of Five Stars.