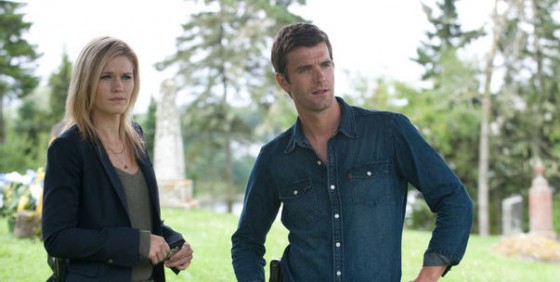 Although we are SO SAD to see Haven finish up its second season – and praying to the gods of the Troubled that there will be a third – we are SO EXCITED to see tonight’s finale! We were also just as excited that we had an opportunity to speak with Nathan, aka Lucas Bryant, just a few days ago about the finale and more.

First, some info about the finale from Syfy:

Season Two of Syfy’s popular series Haven comes to a shattering conclusion on Friday, September 30 at 10PM (ET/PT) when the dead rise up, bringing shocking revelations to Audrey (Emily Rose), Nathan (Lucas Bryant) and Duke (Eric Balfour) and pointing to a coming battle which threatens to split the town forever.

The special multi-episode Twitter story line will also culminate in the September 30 episode.

Based on renowned author Stephen King’s The Colorado Kid, the series follows former FBI agent Audrey Parker (Rose), who becomes a cop in the small town of Haven, Maine, and soon discovers the town’s many secrets, which also holds the key to unlocking the mysteries of her lost past.

It was an absolute pleasure to speak with Lucas Bryant this week; the man is a riot, quite the opposite of taciturn Nathan Wuornos. You’ll see.

SciFi Mafia: Hi, Lucas it’s great to talk to you today, thanks so much for being on the call.

Lucas Bryant: Hey, you got it. “SciFi Mafia”, that’s kind of scary.

Lucas Bryant: Okay good. I have to say the right answers, yes?

Lucas Bryant: I’m not going to tell you where I am. You’ve got eyes on me already, don’t you? I’m looking around now. Yes, there’s definitely some weird vans parked in the vicinity.

SciFi Mafia: Darn, and they were supposed to be incognito. Oh well.

Lucas Bryant: Sadly I must admit I watch it, yes. Not sadly, I’m very proud of it. But I really like to watch my stuff over and over. I fast-forward through everyone else.

SciFi Mafia: Well you hardly can be blamed on that one.

Lucas Bryant: I have not, no.

Lucas Bryant: Right, right. I don’t know if they cut out the whole second half of it yet. I might not even be in the finale at all.

SciFi Mafia: I’m guessing probably you will be, but…

Lucas Bryant: I hope so, yes – or I’m just going to fast-forward through the whole episode.

SciFi Mafia: Too funny! So do you know if we should be planning a cliffhanger like usual?

Lucas Bryant: Yes, there are some definite cliffhangers. I mean, it would be nice to say that everything is revealed and they figure out how to end the troubles, and everyone lives happily ever after. But we want to do another…

SciFi Mafia: Well no, we want a season three.

Lucas Bryant: No, I mean you get some great answers, learn some crazy stuff. And we’ll see if people think that it’s as rug-pulling as the season one finale was. But there’s definitely some huge – some big precipitous – precipitous is not the right word. Like a precipice – like a big, big wall, a cliff! Yes! at the end.

SciFi Mafia: Perfect. Do you know from the show runners, the writers about what might be in store for season three?

Lucas Bryant: I don’t. I have completely given up trying to get my head around what the heck is going on here. There’s stuff that they want to keep from us. But then there’s also – I don’t necessarily want to know the things that Nathan doesn’t know. I enjoy it discovering it as we go, as he does. So I don’t know, no. I mean I hear some rumblings about potential storylines, but then I imagine those will all change as well in the writers room as they hash things out. So no, I’m as clueless as you. Not to suggest that you’re clueless, no.

SciFi Mafia: Certainly not, not when I’ve got a van parked outside your place.

Lucas Bryant: No. Yes I see them, they’re inching closer.

SciFi Mafia: And then last thing, what do you think about working in sci-fi? Are you enjoying it, are you planning on doing more? Or do you prefer non-genre work? I know you’re great with comedy.

Lucas Bryant: Well, sure I would love to do comedy. I would love to do noir, I’d love to do everything. But I’m absolutely having a blast doing sci-fi. And I suppose it is that genre, but I don’t feel like – we’re not running around in space suits every week. And it is a “human” story. So I feel like (these are) pretty universal themes. Yes there’s all sorts of weirdness going on, but I don’t feel like we’re stuck in any particular genre, it feels, I think it’s very cool. I’m proud of its weirdness.

So I would love and am talking with Syfy now about doing other stuff for them and with them. And I’m definitely open to any and all possibilities within and outside of the genre. I’m just an actor and I love to do it all.

SciFi Mafia: That’s great. I was going to ask if you were going to be doing any more for Syfy. It seems to happen a lot with actors that work for the network, so that’s great to hear. That’s great news.

Lucas Bryant: Yes the network is really a fantastic place to be. They do take care of their own, and so there are some opportunities there that I’m definitely looking forward to.

SciFi Mafia: That is so great. Well thanks so much for taking the call, and thanks again for the show.

Lucas Bryant: Hey, you got it. Thank you.

What a great guy. Although he’s notably absent from this clip for tonight’s finale, watch it anyway, it’s SO COOL:

Some other familiar faces will be appearing (reappearing?) as well…