SciFi Mafia Talks With the Stars of DEFIANCE, Premiering Tonight

Excellent, it’s finally premiere day for Syfy‘s enormously ambitious new series Defiance. We’ve been waiting for this for nearly two years. Make sure to check out our review published earlier here at SciFiMafia.com, but in short, it was worth the wait. The crossover game launched earlier this month, and those who have played it will have some fun Easter eggs to discover tonight on the series premiere. 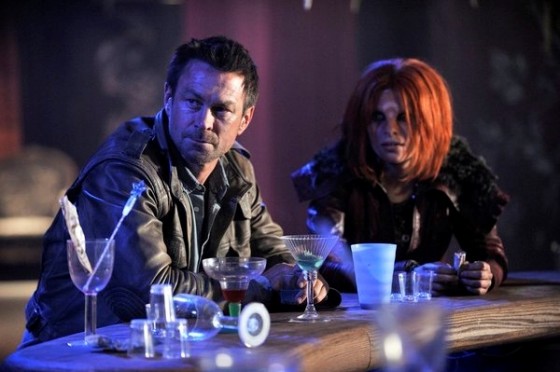 Two of the stars, Grant Bowler and Stephanie Leonidas, spoke with SciFi Mafia last week about what first attracted them to the project, and about the best characterization of the show:

SciFiMafia.com: What attracted each of you most to the project in the first place and did that change as production continued?

Stephanie Leonidas: I think the thing that first attracted me to the script was the fact that it wasn’t kind of just this apocalypse story with aliens fighting each other. There was kind of a real human drama to the piece, and it felt like there was real heart to it, and the characters had stuff that people could relate to I guess, even though they were these aliens with prosthetics on their heads [laughing]. 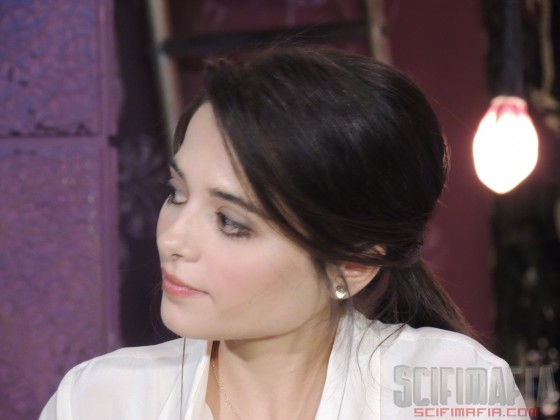 So I think that’s what really attracted me to it, that there was real drama to it. And those are always my favorite scenes to play, like those scenes with Grant in the car, and stuff with Tommy and the other Irathients. There was some really nice stuff there, so that’s what initially got me really into the script.

And I think that’s what’s continued to throughout the series maintain that. Of course Irisa loves getting her knives out and all of that stuff but equally there’s a lot of layers to it, which I love.

Grant Bowler: For me it was all the way from its inception. The first thing that attracted me was — it’s funny because I’m kind of very well known, let’s just say “amongst my representatives,” to not be terribly interested in receiving sci-fi scripts and the first time that the script went across my agent’s desk she didn’t send it to me because she thought I’d get angry at her.

But the casting agents asked me about a month later. They said, “why didn’t you respond to that script? We sent it to you deliberately because we thought you’d love it,” and I kind of double checked on it. Defiance is different than anything I’ve ever read and I guess that’s the key.

And the dynamics in terms of the characters, this grizzled kind of scavenger and an alien adopted stepdaughter, all of these – the setup of the Capulets and the Montagues with the Tarrs and the McCawleys, with a Lady Macbeth-ness of Datak’s missus, you know, the Romeo and Juliet story. They’re fantastic dynamics that were set up right at the beginning and that was what kind of grabbed me was a world I hadn’t seen before, a story I hadn’t seen before and these incredibly kind of strong, epic Shakespearean dynamics.

SciFiMafia.com: It’s interesting you say “Shakespearean” because I agree with you on that, but I’ve seen a lot of press that says it’s very much like a western. How do you feel about that characterization? 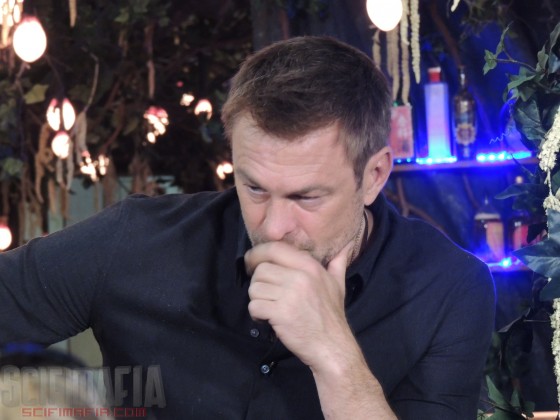 Grant Bowler: I think that’s a really easy thing to grab a hold of. I actually think it’s got a lot to do with the fact that I wear brown.

Stephanie Leonidas: The way you’re pulling it off.

Grant Bowler: It’s funny because I rolled with it for a little while and then I kind of went “I’m bored of this.” But it’s interesting, I think there are – people look for quick labels and sci-fi western is a really, really quick one line sound bite. It’s not, really.

You could probably almost describe the social structure as western, the world is sci-fi and get away with that. But the themes of the show are Shakespearean, and the nature of the show is an immigrant drama. So that’s what I mean when I say I haven’t seen the story before. This genre hasn’t existed before. So you know, people are going to want to throw a name on it so they can communicate the idea of it. But yes, probably in two to five years time they’ll be going “it’s a cross between Defiance and Flashdance” and stuff like that.

The two also spoke with our friends at SciFiVision about what it was like to work on the game, as they both appear on Trion’s crossover Defiance MMO, pictured here: 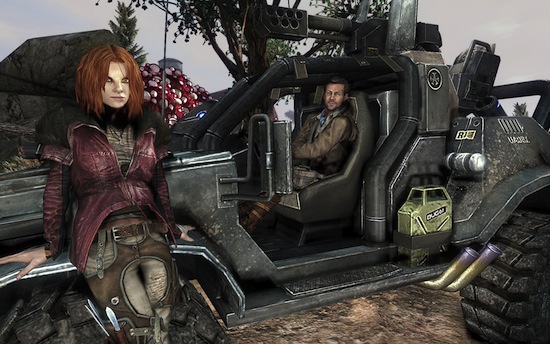 Stephanie Leonidas:    I guess for me it was just there were some shots after a scene from the green screen where they would take body images of the character and the way I’d move and stuff to use that in the game, and also some voice ADR. I mean Irisa doesn’t talk too much so it was just kind of mumbles in the game. But Grant did a lot more so I’ll let Grant continue.

Grant Bowler:       Yes sure, I did end up being recorded in terms of general moves, you know, how I pick things up, how I put things down, how I walk, how I talk, that sort of thing in the game, which is completely different than acting in front of a camera in the sense that what they’re doing is they’re building a library of your physicality so that they can then go away and they do your performance. That side of it was a bit fascinating to me.

But the one that I really enjoyed was the actual motion capture sessions doing cut scene stuff for the game, which I did a few of. I did a number of scenes where they hired a couple of actors and we did the scenes for the game.

And what’s different there between motion capture and filming is that they have you in a motion capture studio and you wear the funny scuba suit with glowy balls all over it, which is the world’s most unattractive wardrobe you could ever put on.

Stephanie Leonidas:    I was sad I didn’t get to do that.

Grant Bowler:       You will; don’t worry, I’ll take the photo. And the studio itself has something like 400, 500 cameras surrounding the space that you’re working in, so when you do a scene I’d say to them “what’s your frame?” and they’d say “oh we don’t know what the frame is, you act the scene and then we’ll create frames around what you’re doing.”

And that was completely new to me. The idea of being able to have a complete and utter sandbox where you just do whatever performance comes into your mind and then they’ll punch in for a close up here, they’ll cut there, they’ll go into a two shot there and they’ll decide all of that after seeing what you do, is completely counter to the filmmaking process. So it’s exactly the opposite. And again a bit nerve-wracking and new because you actually don’t know how they’re going to cut it. You have no idea as an actor how it’s going to cut which is quite intimidating at times, unless you trust them of course, and then it’s incredibly freeing.

SciFiVision:          At least you don’t have to do take after take if that got that many cameras, right?

Grant Bowler:       That’s right, no it’s only a few takes. And when you’re happy they’re happy and they go away and they make up the scene.

Stephanie Leonidas:    I had a little go. I crashed into a wall and couldn’t reverse so I wasn’t very good. But I’m actually really excited to start playing. I got one of the games today so I’m definitely as soon as I get back to London go straight on.

Grant Bowler:       I’m less productive as a human being than Steph. I have the game on PC, PlayStation and X Box and yes I’ve been playing it. I played it the first time, oh well before the beta at E3 last year, and I’ve played it at every stage of development all the way through. I was on the alpha when it was testing and I was on the beta, and I was on it in the prerelease a few hours before it actually launched. So I’ve been there since the thing was up and running.

So. Very. Cool. Thanks so much to Grant Bowler and Stephanie Leonidas for talking about their very excellent new show and cool game. All the best to them and to all involved in the production and promotion of Defiance the series, and of Defiance the game.

Defiance by Trion Worlds is available now for Xbox 360, PlayStation 3, and PC.