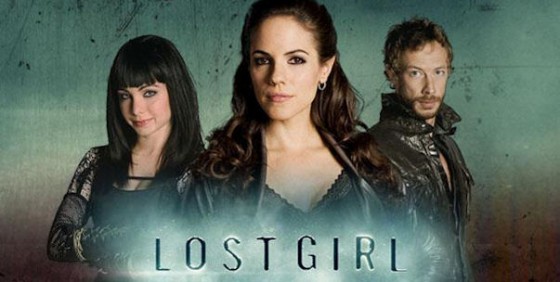 I was so happy, though not completely surprised, when Syfy announced a Season 4 pickup of the Canadian show Lost Girl last week. It is engaging, fun, funny, scary, has cool monsters and tangible cast chemistry. To help us all celebrate, Syfy brought stars Anna Silk (Bo), Kris Holden-Ried (Dyson) and Ksenia Solo (Kenzi) onto a press call to discuss the new season and the finale – although they couldn’t actually discuss either.

Since SciFiMafia.com had the first question, though, it had to be asked:

SciFiMafia.com: Hi, thanks so much for being on the call today and congratulations to you and all of us on the new season pickup, we’re all very excited about that.

Anna Silk: Oh gosh. Well, sure. You know there’s still quite a bit of this season to air, I guess we’re about half way through, maybe a little over half way through and you know the tension definitely builds and we definitely have a very heart pumping season finale, that’s all I can really think of to say.

You know everything’s sort of – some things come together and some things really get ripped apart. So I know that’s really cryptic but I think that the viewers will be pretty excited to see where the season leads and how we end.

And then they’ll be very, very excited to see a fourth season.

Kris Holden-Ried: Yeah it’s – without – sorry, always difficult to figure out exactly what to say with these things, but it’s a really nice build up. I remember while we were shooting at the last like four episodes we were all really excited and everything had ramped up to a good climax, good end.

As the questioning continued, another site mentioned Anna Silk‘s performance in last week’s episode, “There’s Bo Place Like Home” (yes I know,  but try to keep your eyes from rolling right out of your head), and in particular the last scene with her adoptive mother. When SciFiMafia.com‘s chance came up to ask another question, that was the starting-off point:

SciFiMafia.com  Anna I wanted also to join in the congratulations on your performance on that final scene with your adopted mom, it was just absolutely exceptional, we were in tears watching it.

Anna Silk: Well it was definitely the most challenging but honestly the challenge really when I approach scenes like that the challenge for me is to really not really over prepare, and then the challenge is to trust yourself, that the moments are going to be there, and that you’ll be able to live in those moments.

So that was the scary part of doing that, but I think you know some – so I don’t know, the challenging scenes for me, there’s different type of challenges, there’s certainly physical ones but I think that – gosh trying to think of another scene from this season that was crazy.

Kris Holden-Ried: There’s the scene where we were in your dream world, remember?

Anna Silk: Oh yeah, we’ve got some stuff coming up with episode nine I think which we can’t tell you about, but it’s – there’s a really big challenging episode coming up.

That was – yeah, you’re totally right Kris, that episode which I can’t remember what it’s called, I’m sorry.

But it’s coming up soon, you’ll know it when you see it and that was – it required a lot of I guess emotional presence is all I can say and so I had a really good partner in it, in Kris and – so yeah.

That episode was challenging.

Kris Holden-Ried: Yeah, for me too, I mean if you want – there was definitely that one, it had a lot of you know reacting to things that weren’t there so to speak and then like trying to be really present.

But also in 306 when I had to act with Rachel when she was doing her Valkyrie thing on me, I was trying to figure out what to do with that and how it affects me and like – and then being hung over from it, that whole sort of chain of events.

And then climaxing with killing the Kitsune and holding her and wondering if I’ve killed her, that was a good episode for me as far as working in scenes.

Ksenia Solo: Yeah I think that episode for me as well, the Kenzi still that very long scene where I had to play Kenzi and the Kitsune and we filmed it all you know in one day, kind of in one sitting.

So that stands out in my mind for most challenging scene for me this season.

Kris Holden-Ried: That was awesome.

SciFiMafia.com: It was awesome, all three of you have been really top of the game this season, and it’s really been a pleasure watching you, thanks so much.

Thanks again to Syfy and to Anna Silk, Kris Holden-Ried, and Ksenia Solo for taking the time to talk with the press, and for the really exceptional performances so far this season.