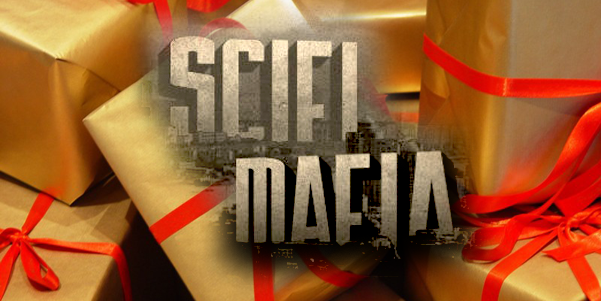 On the last day of SciFi Mafia’s 21 Days of Christmas Loot, we close with a celebration of Tim Burton’s cult classic “The Nightmare Before Christmas”in a 2-Disc Collector’s Edition DVD, BluRay, PJs, and a recommendation for Burton’s “Melancholy Death of Oyster Boy and Other Stories”! 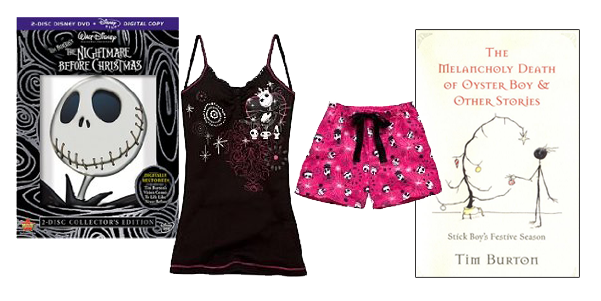 Here’s the official descriptions of these Burton pieces of loot: 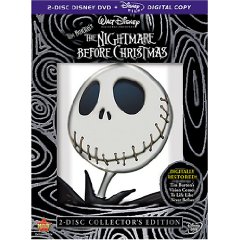 For those who never thought Disney would release a film in which Santa Claus is kidnapped and tortured, well, here it is! The full title is Tim Burton’s The Nightmare Before Christmas, which should give you an idea of the tone of this stop-action animated musical/fantasy/horror/comedy. It is based on characters created by Burton, the former Disney animator best known as the director of Pee-wee’s Big Adventure, Beetlejuice, Edward Scissorhands, and the first two Batman movies. His benignly scary-funny sensibility dominates the story of Halloweentown resident Jack Skellington (voice by Danny Elfman, who also wrote the songs), who stumbles on a bizarre and fascinating alternative universe called … Christmastown! Directed by Henry Selick (who later made the delightful James and the Giant Peach), this PG-rated picture has a reassuringly light touch. As Roger Ebert noted in his review, “some of the Halloween creatures might be a tad scary for smaller children, but this is the kind of movie older kids will eat up; it has the kind of offbeat, subversive energy that tells them wonderful things are likely to happen.” –Jim Emerson

Now digitally restored and remastered with state-of-the-art technology, THE NIGHTMARE BEFORE CHRISTMAS is deeper, darker and more brilliant than ever just as Tim Burton originally envisioned it. Can Christmas be saved? Bored with the same old scare-and-scream routine, Jack Skellington, the Pumpkin King of Halloween Town, longs to spread the joy of Christmas. But his merry mission puts Santa in jeopardy and creates a nightmare for good little boys and girls everywhere!
Bonus Features
THE NIGHTMARE BEFORE CHRISTMAS is the first full-length stop-motion animated film ever created.
The movie contains more than 227 animated characters.
Santa Claus’ head has more than 50 different working parts, and Jack has more than 400 separate interchangeable heads, each handcrafted with a different facial expression.
The smallest working puppet in the movie is a doll from the “real world” Jack visits that is only one inch long.
Sally is wearing a real miniature dress laid on top of foam latex so that the fabric doesn’t move too much on screen.
At the height of production, the animators produced only 70 seconds of finished film per week.
To create Halloweentown’s twisted look, the design artists often made their sketches using their nondrawing hand.
What’s This? Jack’s Haunted Mansion Holiday Tour
Original Theatrical Trailers And Posters
FRANKENWEENIE (Uncut Version) With New Introduction By Tim Burton
VINCENT — Short Film
Tim Burton’s Original Poem Narrated By Christopher Lee
All-New Audio Commentary By Tim Burton, Director Henry Selick And Musical Designer Danny Elfman
Behind-The-Scenes Making Of Tim Burton’s THE NIGHTMARE BEFORE CHRISTMAS
The Worlds Of Tim Burton’s THE NIGHTMARE BEFORE CHRISTMAS Halloween Town; Christmas Town; The Real World
Deleted Scenes
Storyboard To Film Comparison 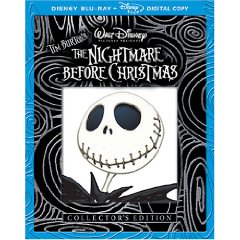 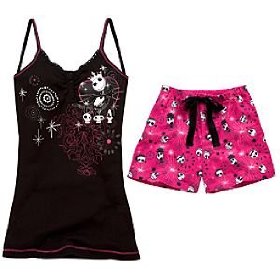 Jack Skellington makes bedtime sweet with this soft Tim Burton’s The Nightmare Before Christmas Pajama Boxer Set. A darling combo for the Sally in all of us. Screen art of Jack Skellington, skulls and decorative star bursts. Elastic-waist boxer shorts with drawstring bow. Camisole top is 100% cotton. 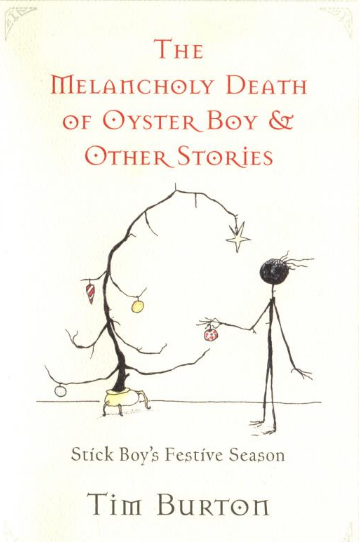 If you haven’t heard of this book of Burton’s, please check this one out! It makes a great gift for any occasion!

This unassuming hardcover in black buckram with a dark lavender title plate is the door into a world of twisted pleasures. Filmmaker Tim Burton (Edward Scissorhands, Beetlejuice, The Nightmare Before Christmas) tells 23 winsomely macabre stories about boys and girls who don’t fit in. Their bodies are misshapen, their habits are odd, and their parents are appalled by them. But they do try hard to be human, like poor unwanted Mummy Boy, who’s “a bundle of gauze”: he goes for a walk in the park with his mummy dog. Some kids are having “a birthday party for a Mexican girl.” They think Mummy Boy is a piñata: “They took a baseball bat and whacked open his head. Mummy Boy fell to the ground; he finally was dead. Inside of his head were no candy or prizes, just a few stray beetles of various sizes.” For all its simple humor, The Melancholy Death of Oyster Boy & Other Stories is a peculiarly disturbing book about the violence that children suffer. It is illustrated in pen and ink, watercolor, and crayon. The themes and imagery are at a young-adult to adult level. –This text refers to an alternate Hardcover edition.

In the manner of the pictorial tales of Shel Silverstein, Roald Dahl, and Edward Gorey–but from a slightly more twisted realm of the imagination–Burton’s creepy stories conjure up the fantastical, even the slightly demented: “The Boy with Nails in His Eyes,” “Roy, the Toxic Boy,” “The Girl with Many Eyes” (“You get really wet/When she breaks down and cries”), and “Brie Boy” (“The other children never let Brie Boy play … but at least he went well with a nice Chardonnay”). — Entertainment Weekly

Buy “Melancholy Death of Oyster Boy and Other Stories” in Hardcover for $14.36 here (on sale from original price of $19.95).