Rumor Has It! Lindsay Lohan Wanted for Role In Snyder’s Superman Reboot 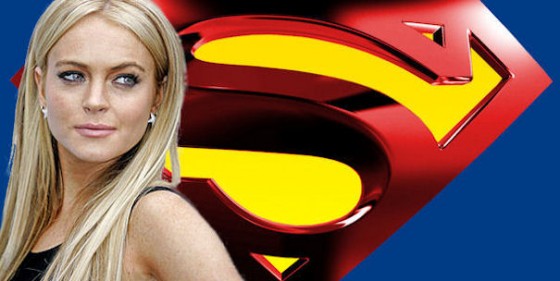 Within the last week, we’ve brought you reports that Warner Bros. is looking for yet another actress to take on an undisclosed leading lady role, opposite Henry Cavill‘s Man of Steel in Zack Snyder’s forthcoming Superman reboot. The character in question is not that of Lois Lane, and the list of contenders for the role has reportedly been narrowed down to Alice Eve (She’s Out of My League, The Raven), Diane Kruger (Inglourious Basterds, Unknown) and Rosamund Pike (Johnny English Reborn, Die Another Day).

Just after that report, we heard from a “most trusted reliable source” of LatinoReview that the three aforementioned actresses that are up for the non-Lois Lane part in the film, are actually vying for the part of a Kryptonian villainess who is going by the name of Ursa.

Ursa is a co-conspirator and accomplice of General Zod. She first appeared in Richard Donner‘s 1978 film Superman: The Movie, where she was portrayed by actress Sarah Douglas (who reprised the role in the sequel, 1980′s Superman II).

Now, TMZ brings us into a land of both shadow and substance, of things and ideas… yes, we’ve apparently crossed over into the Twilight Zone!

The internet’s tabloid supreme says that Lindsay Lohan (Machete) is the latest actress to be rumored for that non-Lois Lane role in Zack Snyder‘s Superman reboot. The actress is said to have had several phone conversations with the producers and is supposed to meet personally with the “Superman” people soon. According to their sources, Lindsay is “dying to show people again how talented she is” and is worried this latest run-in with the law (for which she maintains she’s innocent) could ruin her shot at the movie.