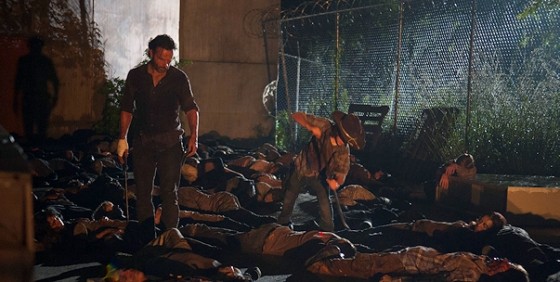 So. Many. Walker. Battles. Way to load up on us, The Walking Dead Powers That Be. That was EXCELLENT. Rick said it’s never going to be the same, but did he know who was just outside the gate? This season has been full of intensity and action, but last week’s may have been the peak. Will that high bar be met or raised this week?

Here for your gruesome enjoyment are the terrific set of videos that the lovely folks at AMC so kindly release each week. We have the “Making of” featurette, the “Inside the Walking Dead” featurette, the “Talked About” clip – I had forgotten that so much action took place within that small amount of time – and a clip of the upcoming episode.


Featurette: The Walking Dead – Inside Episode 405


Scott Wilson really deserves a medal for last week’s performance; he was brilliant.

If you saw a clip from the upcoming episode on last week’s Talking Dead, you saw the middle part of what we have for you here. If you’d like to see the setup and what happens immediately after that interesting clip, take a look:


I foresee a Governor-rich episode in our future. Bring it.