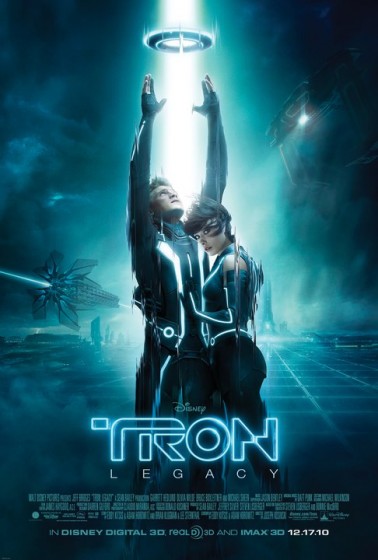 Summary:
Sam Flynn (Hedlund), a rebellious 27-year-old, is haunted by the mysterious disappearance of his father Kevin Flynn (Bridges), a man once known as the world’s leading video-game developer. When Sam investigates a strange signal sent from the old Flynn’s Arcade — a signal that could only come from his father– he finds himself pulled into a digital world where Kevin has been trapped for 20 years. With the help of the fearless warrior Quorra (Wilde), father and son embark on a life-or-death journey across a cyber universe — a universe created by Kevin himself that has become far more advanced with vehicles, weapons, landscapes and a ruthless villain who will stop at nothing to prevent their escape.

“The Grid. A digital frontier. I tried to picture clusters of information as they traveled through the computer. Ships, motorcycles. With the circuits like freeways. I kept dreaming of a world I thought I’d never see. And then, one day… I got in.” – Kevin Flynn


At the conclusion of 1982’s TRON, Kevin Flynn (Jeff Bridges) took over the position of Encom CEO from the ousted Ed Dillinger, and shifted the company in a new direction with his faithful friend, Alan Bradley (Bruce Boxleitner) by his side. Then, in 1989 Kevin Flynn mysteriously vanished, leaving Sam, his young son in the care of his elder parents, in addition to being watched over by Alan Bradley.

Over the next 20 years, Sam Flynn (Garrett Hedlund) became a rebellious thrill-seeker who wanted nothing to do with Encom, the company for which he, in the absence of his father, became the largest shareholder. Aside from outrunning the cops on his Ducati, playing annual hacker pranks on the powers-that-be on Encom’s board, and base-jumping from the top of Encom tower, Sam is basically a loner that lives in a dockside warehouse with his dog, and has never gotten past the disappearance of his father.

After the unannounced appearance of Bradley in his warehouse, Sam takes a trip to his dear old dad’s home away from home, Flynn’s Arcade. Sam finds his father’s hidden office, which is stocked, wall-to-wall with old Encom gear that people familiar with the original film will recognize rather quickly. Being the adventurous hacker that he is, Sam makes multiple attempts to login to an old-school Encom computer and finally scores a working command which fires up Sam’s trip onto The Grid, which his father told him about in great detail when he was a child.

The sets and visual effects of The Grid are astoundingly gorgeous, it’s way more than a simple update of the original. Director Joseph Kosinski, production designer Darren Gilford and their team can take great pride in the world they’ve created. The static polygonal light trails behind the light cycles of the original film have been replaced with beautiful, glassy, fluid-like ribbons of light. Gone are the flat-lands of The Grid, replaced with multi-tiered transparent tracks, with cycles visibly racing on every level. The Disc Wars have gone from glorified dodge ball meets frisbee game-to-the-death (or deresolution) in an essentially flat environment, to a multi-dimensional, gravity defying cage match.

While some people have complained about the de-aged CGI Jeff Bridges being a distraction, I have to disagree. I totally understand and agree that the CG facsimile of Bridges was not perfect, and there were moments where the mouth movements didn’t look quite natural enough to buy him as Bridges, minus 20 years. At the beginning of the film, when we see a younger Kevin Flynn speaking to Sam Flynn as a child in the real world, the effect is really quite impressive.

When they venture to The Grid, and the younger CGI Bridges is actually Clu, a character who is Flynn’s digital, Codified Likeness Utility, the flaws are more pronounced but I think it works in that realm because it brings a cold and artificial feeling to the character, which is in sharp contrast to the warm, caring and zen-like nature of the actual, human Kevin Flynn. Whether that difference was intentional or not, I think it works well and is in no way a distraction.

While the complaints about some of the dialogue being a bit bland are understandable in portions of the film where Flynn is talking Grid tech, and if you’re not a fan of the original or a geek, I could see how it could fall flat. That being said, I fail to understand the complaints about the storyline – Have they not seen the original? This is a sci-fi fantasy movie based on a human entering the computer world, how is that not supposed to come across as completely unrealistic? You most definitely can’t be jaded, and you have to be willing to suspend disbelief to truly enjoy the film… as you always should have to for a good sci-fi fantasy movie, the words fiction and fantasy are present for a reason.

As for the cast of characters, Bruce Boxleitner (51) definitely didn’t forget how to play Alan Bradley after all these years. He was exactly the same character, with the added father-figure concern for his missing, long-time friend’s only son.

Jeff Bridges (True Grit) is as good as he always is. He is definitely channeling a bit of The Dude from The Big Lebowski in his elder, zen-like role as the senior Kevin Flynn (and that’s not a bad thing). Garrett Hedlund (On the Road) did a much better job than I expected, and through his actions and demeanor in the film, he’s obviously a “Flynn”. There are a few times that his dialogue seemed a bit lifeless but, I’d say it was more the fault of what he was given to work with in the script than his delivery of the material. 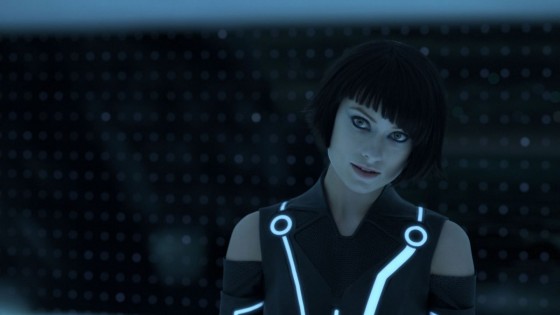 In promotional interviews, Olivia Wilde (Butter, Cowboys & Aliens) described her character as a Joan of Arc style warrior, and I couldn’t agree less. While Quorra is courageous and does kick ass when necessary, Joan of Arc was a leader, where Quorra is a follower and student, innocent, full of wonder and adorably childlike, with a great sense of admiration and duty toward Kevin Flynn. I’m not saying that Ms. Wilde should be “burned at the stake” for the faulty description of her own character, and as far as I know, some of the things that made her more “warrior-like” may have been lost to the editing room.

The character of Quorra is much more interesting and endearing than any Joan of Arc-style character would be in this setting anyway, and Wilde does a fantastic job. I can’t wait to see what her big-screen future holds. 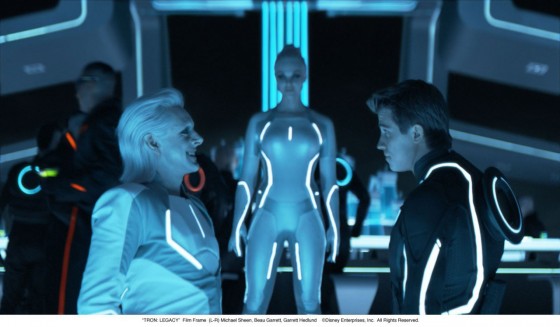 Michael Sheen (The Twilight Saga: Breaking Dawn) as Castor, owner of the End of Line Club just gobbled up the scenery in his turn on The Grid. James Frain (True Blood, The Cape) had a few great moments as Clu’s main henchman and chief intelligence officer named Jarvis, and Beau Garrett (Criminal Minds: Suspect Behavior), who plays The Grid’s lead siren named Gem was stunning, and because of her modulated voice and demeanor, she was totally believable as a “program”. The only thing I could complain about with any of these characters would be their minimal screen time.

Even casual fans of Daft Punk will not be disappointed with the soundtrack. The tunes that the French duo have created for the score, fit into the entire world of The Grid perfectly. Daft Punk‘s appearance in the film, while short (and obviously dialogue free) is a great nod to the duo’s fans, and it’s fairly unique for the composers of a film’s soundtrack to actually show up in the film and become part of the world they’ve provided the sound for. 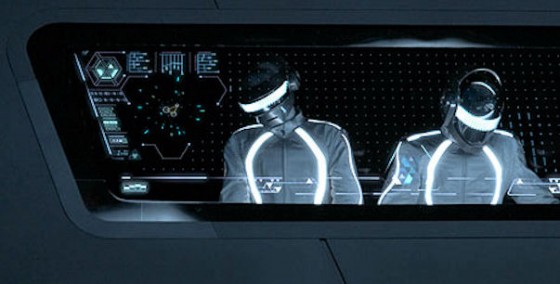 Even though there is plenty of action and breathtaking visuals in the film, there are also some dialogue-heavy parts where the film slows down, which some younger audience members may find boring. The movie is not perfect but, it is definitely a good starting point for the big-screen return of the Tron universe. I don’t think 3D adds enough to warrant the increased ticket price but, TRON: Legacy should definitely be seen on a theater’s big-screen, and Daft Punk‘s score should definitely be heard on a theater’s sound system.

I give TRON: Legacy Four out of Five Stars