Time: Alternate reality 1985 where the days of costumed vigilantes have been brought to an end by a government crackdown and the world holds its breath at the “Doomsday Clock” that symbolizes the probability of nuclear war between the U. S. and the Soviet Union.

Setting: Mostly in the United States with flashbacks to Vietnam and a trip to Mars and ‘Karnak’

Summary:  “An attack on one is an attack on all of us.” The death of one of the Watchmen prompts them to investigate why.

Let me begin by saying that this review compares the “Watchmen” Directors Cut versus the Theatrical release in March.  Courtesy of the Dallas Observer, I had the rare opportunity of seeing “Watchmen: The Director’s Cut” in all its digital glory on the big screen during its one weekend run in theaters before the Director’s Cut was released on DVD a few weeks ago.

I have to say that the Director’s Cut is THE ONLY WAY to watch Zack Snyder’s “Watchmen”. The additional half hour of footage fleshes out the backgrounds and adds dimension and depth to each of the characters’ story arcs and overall, makes the film a stronger statement on the theme of humanity as seen through each of the Watchmen’s eyes.

With this additional footage, you get to:

Zack Snyder’s talent for creating thematic atmosphere shines in his Director’s Cut.  In addition to a beefier story, some of the added footage augmented the action scenes.  I think it is safe to assume that these scenes were cut from the theatrical release for its violent content, but emphasizes the point just how easy human life can be dispatched.  The brutality of these scenes was shot stylistically like the “300” and is striking in its realistic quality.  This sort of violence we can relate to and see in our lives today (war, protests, one on one violence,…).  One of the best action sequences that helped out by additional footage is the fight between Laurie and Dan versus gang of hoodlums in the alley.

A key deleted scene that we brought to you earlier was the death of Nite Owl I.  This scene is so powerful that I cried when I saw it.  This scene must have been cut for time, but I am glad it is included back into the film. (included below; If watching this doesn’t make you want more of the Watchmen, I don’t know what will!)

I strongly prefer this cut over the theatrical release.  I was impressed with the intriguing contrast on the theme of humanity between each of the Watchmen in this version of the film and grateful for the added pieces of the puzzles to their backgrounds on why each of the Watchmen dons the mantle of a costumed superhero. 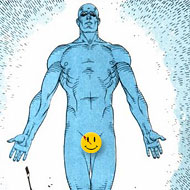 “What?” you say? No mention of the giant blue wang, zen?  To be honest, I saw “Watchmen”, the theatrical release on the IMAX, so I suppose that I became acclimated to seeing it grace the screen!  Yes, I believe there is more screen time for this blue guest star to move gently across Dr. Manhattan’s testicles and I did not mind it at all.  You can just blame Zack Snyder for capturing the eyes of your women.  ;)

But before you buy, keep in mind that there will be another release of “Watchmen” out in the holiday season that includes Black Freighter footage.  More details on this ‘Ultimate Edition’ as it comes in.  Keep an eye out in our News section!