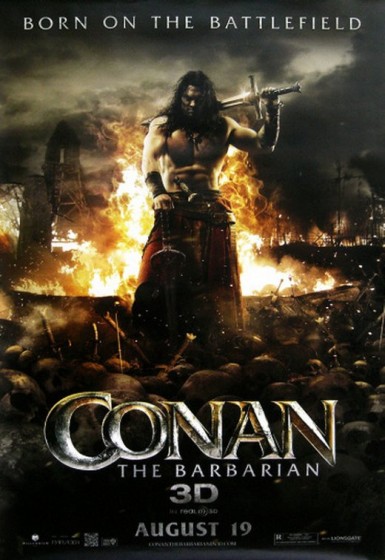 Synopsis:
A quest that begins as a personal vendetta for the fierce Cimmerian warrior soon turns into an epic battle against hulking rivals, horrific monsters, and impossible odds, as Conan realizes he is the only hope of saving the great nations of Hyboria from an encroaching reign of supernatural evil.

I had very high hopes for Conan the Barbarian. Not only was I a fan of the Arnold Schwarzenegger films from the 80s, my dad introduced me to the Robert E. Howard stories when he felt I was old enough to withstand the onslaught of sex, sorcery, and dismemberment that the literary Conan was known for. So, to say that vintage Conan and his 80s counterpart are a cornerstone of my nerd culture world is more than a fair statement.

To add to my hopes and dreams of a Conan revival that was closer to the original than the 80s provided, I also man-crush on Jason Momoa a bit thanks to his work on Stargate: Atlantis. So as I sat down in the theater with the wide-eyed hopes, I muttered a prayer to Crom for a decent experience that would measure up to Howard’s legacy.

Sadly it was a miss. But it was a NEAR miss. 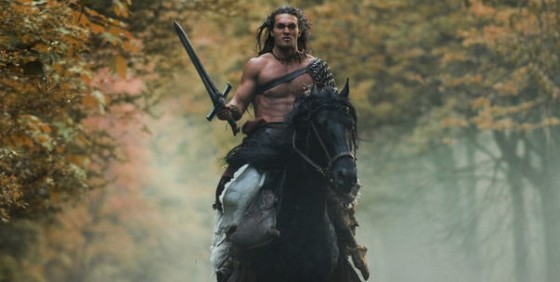 So here is what you need to know up front: Conan the Barbarian IS closer to the Howard original than the 80s films managed. The film takes place during Conan’s pirating years as he travels around Hyboria in search for the man who slaughtered his people. This was a nice touch that the original films never really explored. Conan was more than just a barbarian riding around a dusty landscape on a horse. The filmmakers give us a healthy visual dose of the varying landscapes of Hyboria, and though sometimes Conan seems to just arrive at these far off destinations with little effort, the vistas are absolutely breathtaking. Seriously, major kudos to the art department. The general tone of the film is dark and savage – just what you should expect from a fantasy world plunged into chaos and darkness. A little known fact is that Robert E. Howard was very dear friends with H.P. Lovecraft and the demonology and necromatic sorcery of Hyboria bears a fair resemblance to Lovecraft’s own mythology, and the filmmakers definitely played that up a little bit.

The problem here is there is a lot of emphasis on the savage. The movie opens up on the Cimmerian battlefield, where Conan is cut from his dying mother’s womb. Yeah. And while it doesn’t show the goriest of the details, it’s one hell of a way to get the party started. I’m not the queasy sort of movie-goer, but even I thought the amount of violence was excessive, bordering on ridiculous. I didn’t go 5 minutes without seeing someone get their skull smashed against a stone, or suffer some sort of graphic dismemberment. I like action in my movies, but I expect there to be a healthy dose of plot and character development to balance it all out. While these aspects exist (kinda) in Conan the Barbarian, they are drown out by the sounds of swords clashing and skulls splitting. 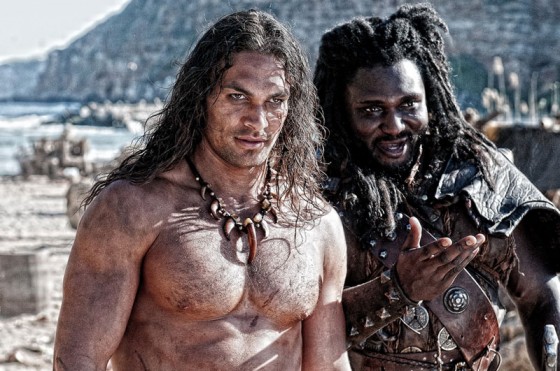 The real shame is that the lucid moments of the film features a competent cast that is woefully under-used. When Jason Momoa isn’t snarling and vowing death on people, he shows a glimmer of promise as a Conan with some actual depth. Bob Sapp plays his partner in crime as the pirate Ukafa, sadly he doesn’t get a lot of opportunity to really shine, but he does make the most of the scenes he’s given, and the same can be said for Saïd Taghmaoui who plays a thief named Ela-Shan who aids the Conan after the Cimmerian saves his life. 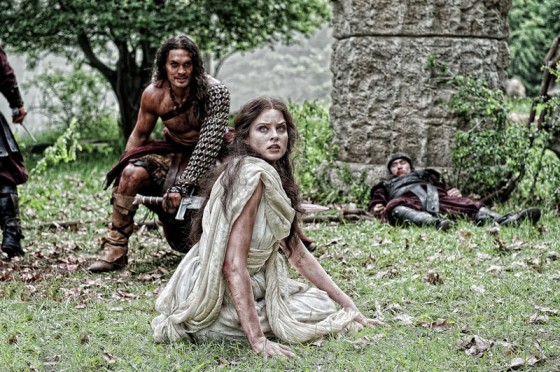 Howard’s fantasy is well known for strong female characters, but they can be pretty and flat (proverbially; physically they are downright voluptuous!) Sadly, this is one area where the film makers adhered to the canon a little too faithfully. There was little chemistry between Momoa and Rachel Nichols who played a monk named Tamara, the last of an ancient bloodline on the run from the scourge of Khalar Zym (Stephen Lang). While there was some fun banter between them early on, but the love interest aspect was forced and could have spent a little more time in the oven before being served up to the audience. The same can be said for Rose McGowan who played the creepy sorceress, Marique. Aside from being downright nasty (and I think a little incestuous) there isn’t a lot there. She’s actually kind of annoying – her best scene is the one in which she dies. 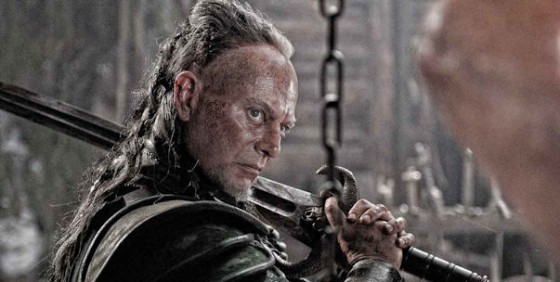 And what can I say about Stephen Lang? Khalar Zym a quintessential villain, and Lang plays him as well as all his power-hungry villain roles. Ironically he seems to be one of the most developed characters of the film, and he’s the one we need the least depth from.

So to sum up, Conan the Barbarian ALMOST hits the mark. If the filmmakers get a chance to revisit Hyboria, and can manage to tone down the action and gore a bit and actually let their cast do their jobs, we may have a great Conan movie on our hands. I wasn’t crushed with my experience, but I’d be lying if I said it was everything I hoped it can be.

I give Conan the Barbarian Three out of Five Stars.