Relive THE WALKING DEAD Superherd in Featurettes, Plus a Peek at the New Episode 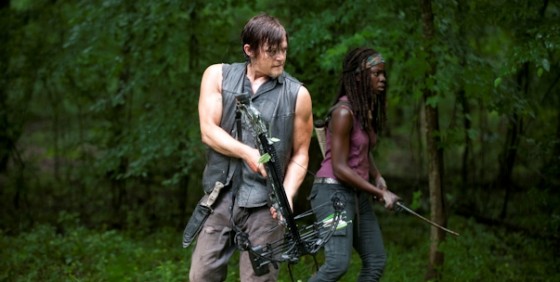 Superherd. My fingers kept wanting to type “superhero” but there is no such thing on The Walking Dead. “Superherd” is what they call that mass of walkers we saw coming over the hill and straight for Darryl, Michonne, Tyreese, and Bob last week, and is also the subject of this week’s “Talked About” clip.

That scene also figures largely in both the “Making Of” featurette and the “Inside the Episode” featurette, along with a lot of other scenes and discussions. As always, the weekly video offering is topped off with a clip from the upcoming episode.

Just a quick note, if you watched Chris Hardwick’s Talking Dead after the episode. You did see a “making of” about the herd, and you did see a clip from the upcoming episode, but both are much shorter than what we have for you here.