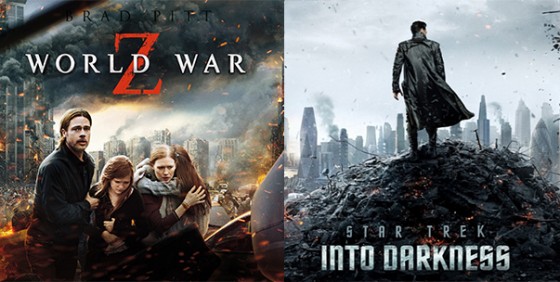 For one week only (Friday, August 30th through Thursday September 5th) you can relive your sweet 2013 summer with two of the biggest blockbusters of the year. And it’s not just for the big cities! I’ve got showtime locally, which is rare for these fun, special deals. Check out the details below on how you can get one ticket to see both Star Wars Into Darkness and World War Z.

TWO SUMMER BLOCKBUSTER MOVIES, ONE TICKET PRICE. ONE WEEK ONLY.

Beginning Friday, August 30th through Thursday September 5th, the double feature allows fans to relive the excitement of two of the summer’s biggest hit films for one ticket price. Tickets are on sale now at www.UltimateDoubleFeature.com, fandango.com, movietickets.com and at participating theatre box offices.

“STAR TREK INTO DARKNESS,” directed by J.J. Abrams, follows the crew of The Enterprise as they are called back home to Earth in the wake of a shocking act of terror from within their own organization. In defiance of regulations and with a personal score to settle, Captain Kirk leads his crew on a manhunt to capture an unstoppable force of destruction and bring those responsible to justice. As our heroes are propelled into an epic chess game of life and death, love will be challenged, friendships will be torn apart, and sacrifices must be made for the only family Kirk has left: his crew. The film earned more than $450 million worldwide upon its release in May.

“STAR TREK INTO DARKNESS” is written by Roberto Orci & Alex Kurtzman & Damon Lindelof and directed by J.J. Abrams. Abrams is producing with Bryan Burk through Bad Robot Productions, along with Lindelof, Kurtzman and Orci. Jeffrey Chernov and Skydance Productions’ David Ellison, Dana Goldberg and Paul Schwake are the executive producers.

“WORLD WAR Z,” with more than $500 million at the worldwide box office to-date, is Brad Pitt’s highest grossing worldwide release. The film revolves around an ex-United Nations investigator Gerry Lane (Pitt), who traverses the world in a race against time to stop a pandemic that is toppling armies and governments and threatening to decimate humanity itself. Mireille Enos and James Badge Dale also star.