Premature Zombification: No Second Season Of AMC’s WALKING DEAD Yet 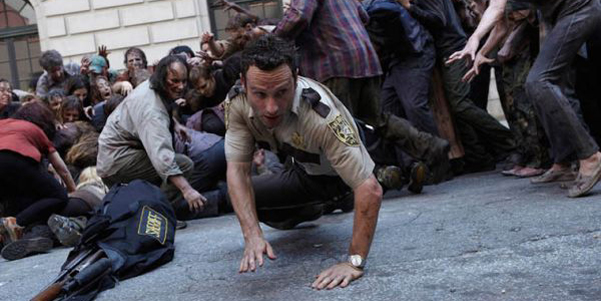 As an update to a previous story that SciFi Mafia ran a few days ago, AMC’s new zombie series The Walking Dead has not been ordered for a second season yet. Writer-director Frank Darabont (The Mist, The Illustrated Man) dismissed early reports that the series had been renewed even before the first season premiered.

Darabont was even surprised to hear that this rumored second season would begin production only a month or two after completing the first:

“Shooting in February? As tired as I am right now getting season one through post, I’d rather shoot myself.”

The Walking Dead, AMC’s live-action adaptation of Robert Kirkman’s graphic novel series of the same name, stars Andrew Lincoln (Heartbreaker) as Rick Grimes, “a police officer who’s shot in the line of duty and wakes up in the hospital to find the world has fallen victim to a zombie plague. He goes in search of his wife and child.”

New Promo for The Walking Dead

The Walking Dead premieres its six-episode first season on AMC on October 31, 2010.