Our Beloved BEING HUMAN is Bidding Us Farewell 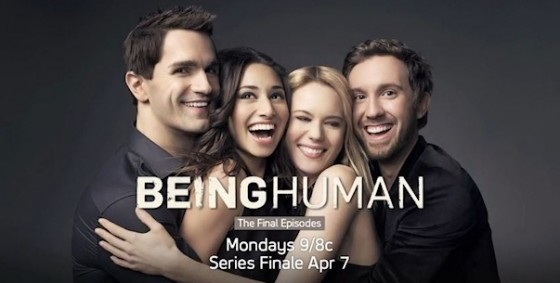 My heart hurts. Like it did with Fringe, even. I have loved Being Human since it first premiered. I watched with an open but somewhat wary eye, since I loved the UK original version already. What we were given, however, by showrunners Jeremy Carver and Anna Fricke, and actors Sam Witwer, Sam Huntington, Meaghan Rath, and then-guest Kristen Hager, was a breath of fresh air, a gift of a reimagined show which eventually took its own path, eventually far surpassing its predecessor in every way.

It is smart, funny, touching, exciting, and the perfect combination of writing, acting, and production that makes it such an excellent, A-list show, which beyond all odds has gotten better every season. Sigh. Here’s the email I received, along with a Thank You video from the cast:

With the second half of “Being Human’s” 4th season set to kick off, our human-at-heart characters are about to embark on a journey full of twists, turns and surprises that will culminate in a spectacular series finale on Syfy, Monday, April 7th.

Showrunner Anna Fricke and the talented producers, writers, cast and crew have done an amazing job bringing this show to life over the past four seasons and we sincerely thank them and the series’ production company Muse Entertainment for their hard work. They’ve saved the best for last with the final six episodes that revisit the story’s beginning, leading to a not-to-be-missed send-off for Aidan, Sally, Josh and Nora.

Featurette: Being Human – Cast Thank You


While it IS great that it’s going out on top, and with apparently a finale that has been intended to be a series finale, I am still ridiculously sad.