New HAVEN Featurette and TV Spots, plus Viral Campaign With the Darkside Seekers

Haven will be back in less than three weeks and I couldn’t be happier, I am so in love with this show. To get everyone ready, we have a featurette, two TV spots, and… a cool social media campaign! If you’re a fan of the show – and why wouldn’t you be? – you’ll remember last year’s campaign, #EscapeToHaven, that turned out to be a head’s up about The Guard.


Now for the viral campaign…

This account has been co-opted by us, The Darkside Seekers. We’re here to #DiscoverHaven once and for all.

We’re paranormal investigators, The Darkside Seekers, and we’re here to investigate the town of Haven, Maine as a hotspot of supernatural activity.

Havenites: We’re paranormal investigators, the Darkside Seekers. It has come to our attention that the town of Haven, Maine is a hotspot for supernatural activity. There’s something strange going on, and we’re here to #DiscoverHaven and dig up the secrets this town’s been hiding. Until that time, this page will remain in our control. 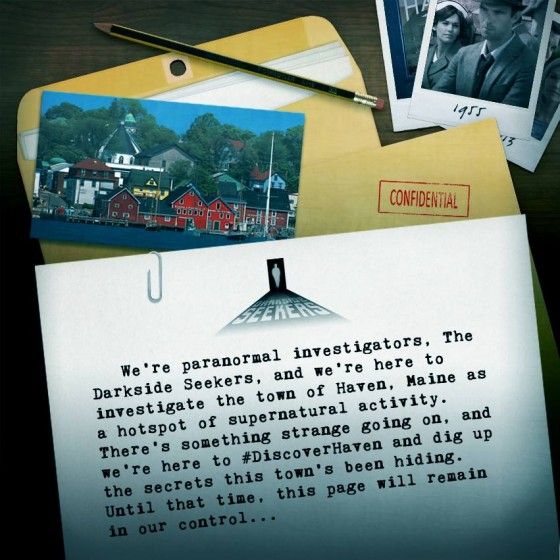 Yes, we’re as seen on TV—but if you haven’t been lucky enough to catch our show, we’re the Darkside Seekers, a duo of paranormal investigators. We aren’t here to disturb your town, only understand it…and to #DiscoverHaven. Find us on Twitter @DarksideSeekers.

As the Darkside Seekers, we’ve seen some cover-ups in our day, but this is…extensive. It may go back decades.

And they’ve uncovered this:

Found on a Haven beach: http://t.co/DCjx4SDvi1 What is this? #DiscoverHaven

Last year’s #EscapeToHaven campaign, we later learned, was run by The Guard, a group of somewhat militant Troubled. (If you’re new to the series, people with special abilities, like attracting bullets or not feeling pain, are called “Troubled”, and there are a lot of them living in Haven). It looks like there may be a new trouble in town…

So follow the Twitter account and Facebook page, and make sure to use the #DiscoverHaven hashtag to follow along… And for crying out loud, if you haven’t seen Haven yet, get on it! You have three seasons to watch before Friday the 13th!