New Clip from the Next Episode of TRANSFORMERS PRIME 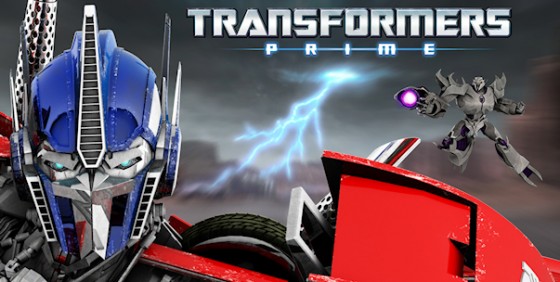 I hope you’ve had a chance to catch this terrific animated series on The Hub, now in its second season. Executive produced by Alex Kurtzman and Roberto Orci (Star Trek, the Transformers feature films, Fringe), it received a 2011 Daytime Emmy for Background Design and Color Design, and nominations for writing, directing, music direction and composition, and Outstanding Performer in an Animated Program for the legendary Peter Cullen as Optimus Prime – yes, the same man who gave his voice to Prime in the movies and video games.

So it looks great, it sounds great, and it has some good solid storylines. You’ll also recognize some of the other voice actors: Jeffrey Combs (Star Trek: Deep Space Nine) as Ratchet, Ernie Hudson (Ghostbusters, Ghostbusters 2) as Agent Fowler, and Markie Post (Murphy Brown) as Jack’s mom June, and recurring guest voices including Firefly castmates Adam Baldwin as Breakdown and Gina Torres as Airachnid.

Here’s a clip from this week’s upcoming episode entitled “Flying Mind”, via MTVGeek:

To get caught up quickly with the series, even if you’re brand new to the Transformers world, click here to watch the great recent episode “The Grill” where you get pretty much the whole series summarized through clips. Here’s what The Hub has to say about the series:

TRANSFORMERS PRIME chronicles the triumphant return of the AUTOBOTS via the most cutting-edge computer-generated animation ever seen on television. From Executive Producers Alex Kurtzman & Roberto Orci (‘Star Trek,’ ‘Transformers’ feature films, ‘Fringe’), and Jeff Kline (“Jackie Chan Adventures,” “Men in Black: The Series”), Transformers: Prime deepens the epic mythology of both the Autobots and Decepticons, while starting fresh for a new generation of viewers and future fans. Optimus Prime, Bumblebee, Arcee, Ratchet, Bulkhead, and many others are back to “roll out” against Megatron’s latest attempt to conquer Earth. And Megatron proves to be more powerful than ever, having acquired a rare element that allows him mastery over life itself. ‘Team Prime’ may be few against the Decepticon hordes, but they find increased strength via bonds forged with three human teenagers. Make no mistake, Transformers Prime will deliver heavy metal action, and nail-biting suspense – but it also promises to take the human drama to levels as yet unseen by the franchise.

The second season of the popular animated series “Transformers Prime” digs deeper into TRANSFORMERS mythology as both the Autobots and Decepticons uncover clues relating to secret artifacts of Iacon, Cybertron’s capital city. Their discoveries could not only change the balance of power in the war, but also potentially revive their dead home planet.

To find The Hub in your area, click here and look for the link at the top of the page: “Find the Hub on TV”.

Transformers Prime, featuring the voices of Peter Cullen and Jeffrey Combs, airs Saturdays at 8:30e/7:30c/5:30p on The Hub.