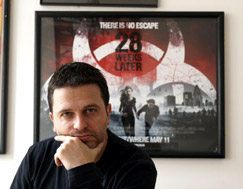 Gore Verbinski has stepped out of the directing slot, but remains the film’s producer through his U-based Blind Wink shingle. John Logan wrote the script.

Verbinski opted out of directing because the studio’s budget plan for the film has been revamped to lens abroad in order to take advantage of tax credits and favorable exchange rates. Verbinski couldn’t commit to an overseas shoot because he is locked into directing the Paramount animated film “Rango,” with the title character voiced by his “Pirates of the Caribbean” cohort Johnny Depp.

Fresnadillo directed the 2001 Spanish thriller “Intacto,” and made his Hollywood breakthrough with “28 Weeks Later.”

With “Bioshock,” Fresnadillo is stepping into one of the highest-profile projects on the Universal roster. Verbinski came attached as director when Universal made a multimillion- dollar against gross percentage acquisition from Take-Two. Verbinski then stepped away from directing his fourth “Pirates of the Caribbean” film because he expected to be in production on “Bioshock” last spring in Los Angeles.

But Universal put on the brakes during the pre-production phase because the budget rose to $160 million and the studio needed it to cost less. At the time, Universal sources vowed this would not turn into another “Halo”– U and partner Fox dropped out of that vidgame adaptation, which was to be directed by “District 9” helmer Neill Blomkamp with Peter Jackson producing. But the negotiations with Fresnadillo indicate the studio is determined to make “Bioshock” offshore.

Once it was clear Verbinski wouldn’t direct, he and the studio spoke to Fresnadillo, whose deal is contingent upon the thumbs-up from Take-Two, which maintains director approval. Fresnadillo’s producing partner, Enrique Lopez Lavigne, is in talks to become a producer.

“Bioshock” takes place in the underwater city of Rapture, where a pilot crash-lands near a secret entrance and becomes involved in a power struggle.