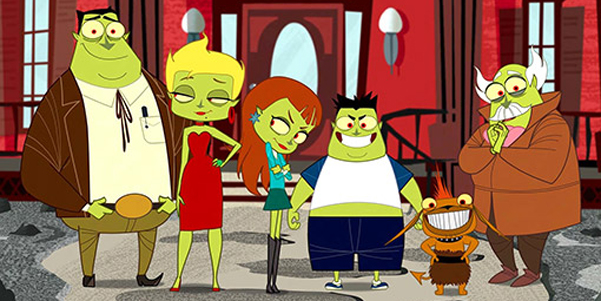 As if it weren’t already hot enough outside, you television is about to become host to TBS’s “Neighbors from Hell” that premieres tonight. This animated series is follows the Hellman family as they are sent to earth to save Hell from human beings. Comedy ensues as they learn how to live amongst humans. This animated series stars the voices of Molly Shannon, Patton Oswalt, Will Sasso, Tracey Fairaway, David Soren, and Kyle McCulloch. Check out the synopsis, trailer, and behind-the-scenes look below:

Synopsis for “Neighbors from Hell”

When Satan learns that Petromundo, a huge global conglomerate, has created a super-drill that could potentially burrow to the center of the earth and expose Hell, he sends one of his demons to eliminate the problem. The demon is Balthazor, a good-natured, low-level torturer who has amassed an encyclopedic knowledge of the human condition thanks to his love of classic TV sitcoms.

Balathazor and his family head to earth with one mission: to blend in with the humans and figure out how to destroy the drill, thus protecting Hell. More accustomed to life in the nether regions, the Hellmans try to follow the rule of SNORFIN–“seem normal and fit in”–but they quickly learn that humans can be more evil than any demon ever could.

Soon, the Hellmans discover that their demonic natures are no match for the twisted ways of their earthly counterparts…

Trailer for “Neighbors from Hell”

Behind the Scenes of “Neighbors from Hell”

“Neighbors from Hell” premieres tonight on TBS and airs Mondays at 10/9C.