Must Watch! Prequel to This Year’s DOCTOR WHO Christmas Special 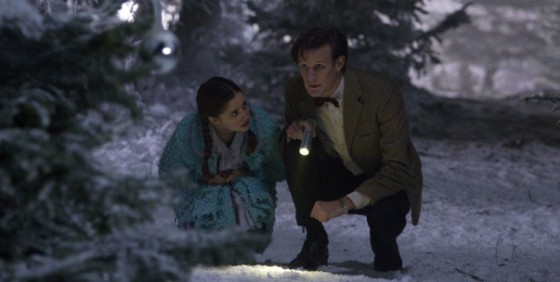 Just when we’re thinking they can’t possibly come up with more videos and pictures of the upcoming Doctor Who Christmas Special without spoiling the whole thing, they do something clever and come up with new content. And we have it for you right here, right now. It’s the official prequel to “The Doctor, the Widow, and the Wardrobe”:

Oh dear, in trouble again I see. WILL HE MAKE IT? He’d better, I’m planning my Christmas around the special.

Along with the prequel, BBC America has issued a new episode summary, which by its nature is a bit spoilery. You have been warned:

In DOCTOR WHO: THE DOCTOR, THE WIDOW AND THE WARDROBE, it’s Christmas Eve, 1938, when Madge Arwell comes to the aid of an injured Spaceman Angel as she cycles home. He promises to repay her kindness — all she has to do is make a wish.

Three years later, a devastated Madge escapes war-torn London with her two children for a dilapidated house in Dorset. She is crippled with grief at the news her husband has been lost over the channel, but determined to give Lily and Cyril the best Christmas ever. The Arwells are surprised to be greeted by a madcap caretaker whose mysterious Christmas gift leads them into a magical wintry world. Here, Madge will learn how to be braver than she ever thought possible. And that wishes can come true…

The Doctor Who 2011 Christmas Special “The Doctor, the Widow, and the Wardrobe” airs December 25 at 9/8c on BBC America.