Must Watch! Awesome Trailer for the Return of Darth Maul On STAR WARS: THE CLONE WARS 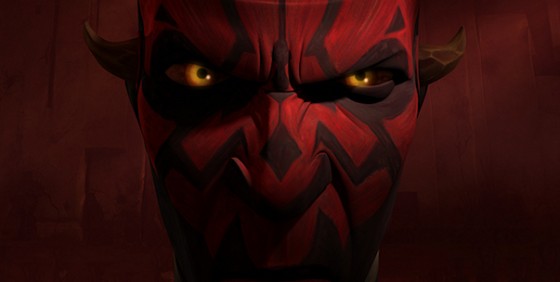 We’ve been telling you about this for months, and now it’s finally almost here. Darth Maul returns on Star Wars: The Clone Wars. We told you last week who is doing the voice – the wonderful Sam Witwer – and we showed you a little of what to expect in that “making of” trailer featuring him. Now we have this really great trailer which makes us want the episodes to air RIGHT NOW. First some new details about the storyline, then the trailer:

Season Four of Star Wars: The Clone Wars concludes with a nail-biting, two-part finale arc beginning Friday, March 9 at 8 p.m. (ET/PT) on Cartoon Network with “Brothers.”
After being used as a weapon of vengeance by Count Dooku and Asajj Ventress, the dark warrior Savage Opress embarked on a galaxy-spanning quest to find his long-lost brother, the legendary Darth Maul. Maul lives in the depths of a ruined world as a shattered madman barely held together by dreams of vengeance. Savage conspires with the scheming witch Mother Talzin to heal Darth Maul’s body and mind, so that the brothers can begin a new crusade of vengeance against the Jedi.

The saga continues on Friday, March 16, in “Revenge,” as Obi-Wan Kenobi finds an unlikely ally when battling against the dreaded brothers.

Maul returns as you have never seen him before as the action-packed season culminates in a climactic finale that builds suspense until the very last moment.