Iron Man 3 has delivered one of those posters that inspires me to write really literarily challenged things like “DAYUM” and “RUH-ROH” because it’s just so full of awesome and smackdown. The character posters we saw earlier this week were all pretty tame compared to the mayhem going on in this poster. Feast your eyes on the latest Iron Man 3 with Robert Downey Jr. taking center stage. 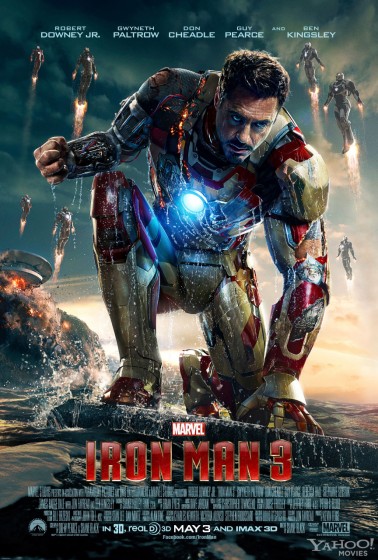 I mean, seven suits? Are they manned? Unmanned? That’s a pretty nasty scenario either way. Not to mention that we see Tony Stark’s (Robert Downey Jr.)  glorious house/lair burning to a crisp in the background, which we were teased with during the last trailer. In fact, the whole campaign has been less than triumphant. He’s not being thrown any softballs in this movie, for sure.

Just to give you a refresher, here’s the “Extended Look” trailer from Super Bowl Sunday.

I can’t wait for the next trailer! Especially since May can’t get here fast enough!