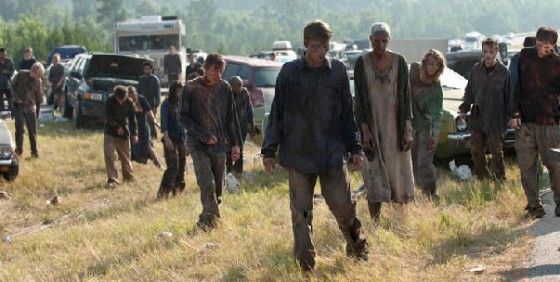 More zombies? Yes please. More shows of the caliber of The Walking Dead, about the zombie apocalypse? YES. PLEASE. As the president of AMC says, it’s a no-brainer. Yes it’s a great line, but it’s also an excellent point. Given the stunning success of the show, why wouldn’t they?

The Walking Dead comics creator Robert Kirkman will be an executive producer, joined by the two other primary TWD executive producers, Gale Anne Hurd and David Alpert. Although it will be set in the same world as TWD, it will be an otherwise entirely new storyline, outside of the comics series. It’s currently hoped to be on our screens in 2015.

AMC Readies To ‘Spread The Dead’

Robert Kirkman, Gale Anne Hurd And David Alpert On Board As Executive Producer

New York — September 16, 2013 — AMC announced today that the network is in the initial stages of developing a companion series to its original drama series The Walking Dead, which premiered on AMC in October of 2010. The Walking Dead is currently the #1 show on television among adults 18-49. Robert Kirkman, Gale Anne Hurd and David Alpert are on board as executive producers, with AMC Studios set to produce. The companion series has a target on-air date of 2015.

“Building on the success of the most popular show on television for adults 18-49 is literally a no-brainer,” said Charlie Collier, AMC’s president and general manager. “We look forward to working with Robert, Gale and Dave again as we develop an entirely new story and cast of characters. It’s a big world and we can’t wait to give fans another unforgettable view of the zombie apocalypse.”

“After 10 years of writing the comic book series and being so close to the debut of our fourth, and in my opinion, best season of the TV series, I couldn’t be more thrilled about getting the chance to create a new corner of The Walking Dead universe,” said Kirkman. “The opportunity to make a show that isn’t tethered by the events of the comic book, and is truly a blank page, has set my creativity racing.”

Season four of The Walking Dead returns to AMC on October 13. The Walking Dead is based on the comic book series created and written by Robert Kirkman and published by Skybound, Kirkman’s imprint at Image Comics.

The Walking Dead season three out-delivered everything on television including The Big Bang Theory, The Voice, Game of Thrones, Modern Family, and almost doubled The Bible for the broadcast season for adults 18-49.

* * *
About AMC
Whether commemorating favorite films from every genre and decade or creating acclaimed original programming, AMC brings to its audience something deeper, something richer, Something More. The network reigns as the only cable network in history ever to win the Emmy® Award for Outstanding Drama Series four years in a row, and boasts the most-watched drama series in basic cable history with The Walking Dead. AMC’s original drama series include Mad Men, Breaking Bad, Hell on Wheels and Low Winter Sun. The network recent greenlit two new drama series, working titles Halt & Catch Fire and Turn, both of which will be premiering in 2014.AMC also explores authentic worlds with bold characters through its slate of unscripted original series like Comic Book Men, Small Town Security, Talking Dead, Talking Bad and Freakshow. AMC is owned and operated by AMC Networks Inc. and its sister networks include IFC, Sundance Channel, and WE tv. AMC is available across all platforms, including on-air, online, on demand and mobile. AMC: Something More.

We will absolutely keep you posted.