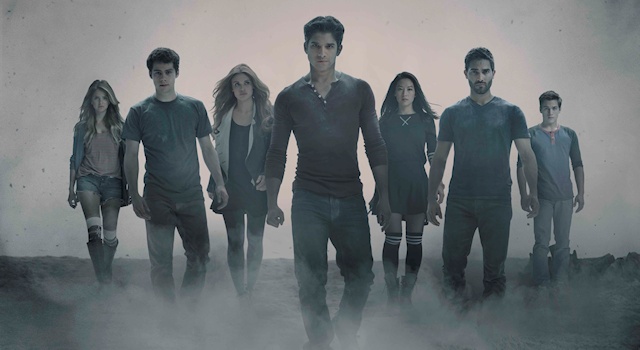 This season of Teen Wolf has been about as twisted as it gets, and it will not release me from its powerful hold. I can’t believe it’s already time for the season finale. THANK GOODNESS (and MTV) that we’ll be getting an extra-long amount of finale goodness, as well as an extra-long amount of time to deal with our “I CAN’T BELIEVE THAT JUST HAPPENED”s in the extra-long Wolf Watch that will follow.

MTV TO CONCLUDE SEASON FOUR OF “TEEN WOLF” WITH A SUPERSIZED FINALE AND “WOLF WATCH” EPISODE ON MONDAY, SEPTEMBER 8 BEGINNING AT 10:00 P.M. ET/PT

Special Presentation “Being Tyler Posey” to Air on Sunday, September 7 at 10:00 p.m. ET/PT

NEW YORK, NY (September 4, 2014)—MTV announced today the season four finale of its hit scripted drama Teen Wolf will be expanded to 75 minutes, followed by an extended 45-minute Wolf Watch. On Sunday, September 7 at 10:00 p.m. ET/PT, MTV will air Being Tyler Posey, an hour-long special that follows the Teen Wolf star off the set and into his personal life to see how he juggles his relationship, family, friends and being a celebrity.

In the season four finale, “Smoke & Mirrors,” Scott and Stiles return to La Iglesia to save the Pack from Kate. Then, on Wolf Watch, host Jill Wagner will sit down with Executive Producer Jeff Davis and series’ stars Tyler Posey, Tyler Hoechlin and Dylan O’Brien to get the inside scoop on the finale.

Tyler Posey’s career has exploded with his breakout role on MTV’s Teen Wolf and Being Tyler Posey takes an inside look at Tyler’s life when he’s off set: from planning his wedding to re-connecting with his old friends, hanging out and riding motorcycles with his dad and facing his mom’s struggle with breast cancer.

It was previously announced the hit drama series will return for a two-part, 20-episode fifth season. Additional details will be announced at a later date.

ABOUT MTV
MTV is the world’s premier youth entertainment brand. With a global reach of more than a half-billion households, MTV is the cultural home of the millennial generation, music fans and artists, and a pioneer in creating innovative programming for young people. MTV reflects and creates pop culture with its Emmy®, Grammy® and Peabody® award-winning content built around compelling storytelling, music discovery and activism across TV, online and mobile. MTV’s sibling networks MTV2 and mtvU each deliver unparalleled customized content for young males, music fans and college students, and its online hub MTV.com is a leading destination for music, news and pop culture. MTV is a unit of Viacom Inc. (NASDAQ: VIA, VIAB), one of the world’s leading creators of programming and content across all media platforms. For more information, go to www.mtvpress.com.

ABOUT MGM TELEVISION
MGM Television is a leading producer and global distributor of content for television and digital platforms, with distribution rights to original productions and a robust catalog of 10,500 television episodes and nearly 4,000 feature film titles covering some of entertainment’s premiere franchises including the James Bond franchise and “The Hobbit” trilogy. Current television projects include the hit series “Vikings,” heading into productionfor its third season on HISTORY; the critically-acclaimed limited series “Fargo,” a co-production with FX Productions and “Teen Wolf,” which will air its fourth season on MTV. In addition, MGM Television serves as the syndicator for “Right This Minute” and “Let’s Ask America.” Through its finance and distribution entity, Orion TV Productions, MGM Television’s courtroom series “Paternity Court” with Lauren Lake begins production this summer. For more information, visit www.mgm.com.

ABOUT 11TH STREET PRODUCTIONS
The company behind MTV’s “16 and Pregnant” & “Teen Mom” franchise, 11th Street Productions is a New York based film & TV company with a mission to produce thought-provoking programming. Founded in 1996 by indie darling Morgan J. Freeman, 11th Street began as an independent film company, producing the critically acclaimed “Hurricane Streets”, “Desert Blue” and “Just Like the Son”. In 2008, Independent Spirit Award nominee and producer Dia Sokol Savage partnered with Morgan after the release of her feature film directorial debut, “Sorry, Thanks.”