Ed Brisson is the newest addition to the Marvel Comics family. The well-known freelance letterer and Image Comics writer will be taking over at least two issues of Secret Avengers from the series’ regular writer Nick Spencer. Brisson will come on board during Infinity, Marvel‘s latest crossover event that sees the the Avengers leaving Earth unprotected from the forces of Thanos while they are uniting the rest of the universe against another threat. 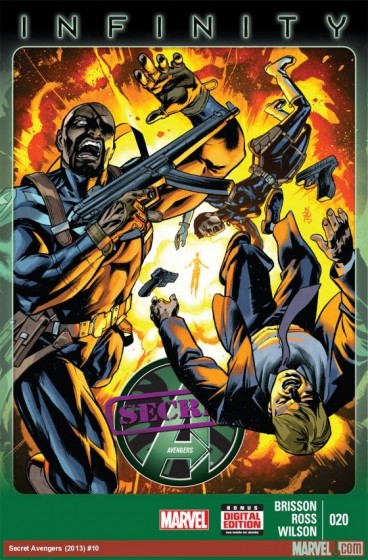 The news first broke in an interview published on Marvel.com where Brisson is quoted, “In Secret Avengers, S.H.I.E.L.D. and company have to step out from the shadows . . . It’s a prime opportunity for our core S.H.I.E.L.D. Team – Nick Fury, Agent Coulson and Maria Hill – to step up and make sure there’s a home for the Avengers to come back to. They go from covert missions to straight up overt battles with Thanos’ thugs in the streets of Brooklyn.”

“I love the way the Secret Avengers normally operate,” he continues. “But when their own planet is being attacked by hordes of alien invaders it only makes sense that S.H.I.E.L.D. would get out there on the front lines and defend their home. Added to the mix is a new superpower on their team, one who quite literally drops into their laps and helps fill the gap while most of the Secret Avengers are off planet.”

Brisson later confirmed on Twitter that he would be writing two issues of the series starting at Secret Avengers #10, due in October.

Secret Avengers regular writer Nick Spencer stated on his Twitter account that his absence was simply a break from his duties rather than a sign that he was departing the series.

Brisson‘s writing credits include Comeback, Murder Book and the upcoming title Sheltered, all of which are published under Image Comics.