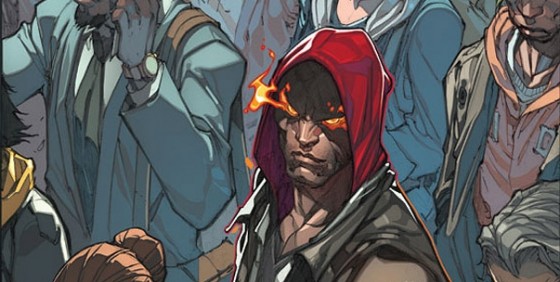 Marvel Comics‘ pan-universal events have become a staple of the publishing company’s repetoire. Now, even before the much-awaited Infinity event has gotten underway, Marvel has revealed its next big shakeup with Inhumanity.

Entertainment Weekly first broke the news, with Marvel Comics editor-in-chief Axel Alonso saying “The effect on the Marvel Universe will be seismic.”

Thus far, the plot can be summarized as follows: In the aftermath of Infinity, massive amounts of a mystical substance known as the Terrigen Mists will be released throughout the world, granting an enormous number of the Marvel universe’s otherwise regular citizens new superpowers.

“You might learn that your new self is fantastic, beautiful, filled with immense power,” says Alonso. “By the same token, you could turn around and find out that you’re nothing. You’re a blob. You have no powers. You can create a little flame out of your pinkie.”

EW also revealed that the central plotline of the event will unfold in the new ongoing series Inhuman, which will be written by Marvel veteran Matt Fraction (Hawkeye) and drawn by Joe Madureira, most notable for his legendary run on Uncanny X-Men in the 1990s.

Fraction didn’t hint much at the overall plot, but had this to say of the new title:

“Our focus characters are drawn into the palace intrigue of this shattered Inhumans Royal family . . . It becomes a superhero story and a mythical story, all revolving around turning the world into a world full of superheroes.

“It’s giving us a chance to get back to a classic Marvel metaphor of alienation,” he continues. “We’re telling science-fiction stories, but really it’s about race, gender, sexual equality. It’s a very relevant, pertinent metaphor.”

Inhumanity will be hitting comic shops this December.