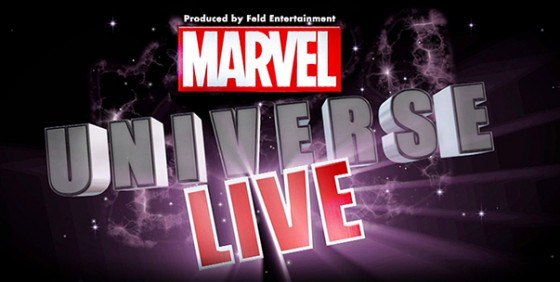 As a parent, I’ve suffered through The Wiggles and The Doodlebops and probably blocked out other live action kids shows that I may or may not have known the words of all the songs. But I think if we were going to see Marvel Universe Live with (or without) the kids it would be a pretty momentous and fun event for all of us. Not just the kids.

Well Marvel Universe Live is coming in 2014 and you can sign up on their website for updates on showing. It sounds awesome. Check out the press release.

Vienna, Virginia – – March 13, 2013 – – Feld Entertainment, Inc. and Marvel Entertainment, LLC announced today a groundbreaking agreement, which allows the companies to produce an unprecedented new show that brings Marvel characters and stories to life in live-action arena spectaculars. The biggest Super Hero icons in the world; including Spider-Man, Iron Man, The Avengers, and X-Men unite together in one place to defend the Earth against the threats from the most fearsome villains in the Marvel Universe.

Under the recently signed multi-year agreement, family-owned and operated Feld Entertainment will produce live Marvel touring events in the US and internationally. Launching in July 2014, a new production of Marvel character-based stories will be coupled with state-of-the-art special effects, pyrotechnics, aerial displays, martial arts and countless other show elements to bring audiences into the Marvel Universe.  The production will embark on an 85-city North American tour before heading around the globe.

“This collaboration with Marvel is a tremendous milestone for our business that will give us access to some of the most iconic and revered Super Heroes ever created. It builds upon our 33-year long partnership with Disney, Marvel’s parent company,” said Feld Entertainment Chairman and CEO Kenneth Feld. “This partnership demonstrates Marvel’s confidence in Feld Entertainment to present their most admired characters in this new channel,” he added.

“We are excited to collaborate with Feld Entertainment to bring millions of our Marvel fans around the world a new and authentic way to engage with their favorite characters and villains,” said Marvel’s Chief Creative Officer, Joe Quesada. “This new live action production will bring the greatest Marvel Super Heroes from the movie screen and pages of our comic books into a spectacular live tour.

“Feld Entertainment has the experience and expertise to showcase our characters like no other company and bring them to audiences everywhere,” said Marvel Studios’ Vice President of Business Development, Sean Haran. “As the worldwide leader in live entertainment, we trust Feld Entertainment will deliver the thrilling experiences our fans expect.”