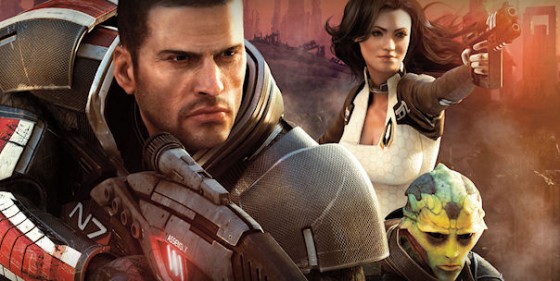 Legendary Pictures has announced that it’s optioned the film rights to the EA and Bioware sci-fi video game series Mass Effect. Writer Mark Protosevich (I Am Legend, Thor) is in talks to write the script. Legendary’s Thomas Tull called Mass Effect “ripe for translation,” saying it had “depth, compelling characters and an engaging back story.”

Check out the game trailer and full press release below for more details.

Electronic Arts Inc. today announced that Legendary Pictures, whose successful co-productions include The Dark Knight, 300, Clash of the Titans, The Hangover and Watchmen, has acquired theatrical feature film rights to the hit videogame franchise, Mass Effect. The project will also fall under Legendary’s co-production and co-financing agreement with Warner Bros., who will distribute the film worldwide. The producers are in discussions with Mark Protosevich (I Am Legend, Thor) to draft a screenplay based on the epic science fiction game series. Legendary’s Thomas Tull and Jon Jashni will produce the film with Avi and Ari Arad. BioWare co-founders Ray Muzyka and Greg Zeschuk will serve as executive producers, as will Mass Effect executive producer Casey Hudson.

BioWare’s epic science fiction series takes place in the year 2183 and follows Commander Shepard of the SS Normandy who leads a team on a mission to defeat an ancient alien race that invades the galaxy every 50,000 years, wiping out all organic life. The most recent game in the series, Mass Effect 2, was released in January of 2010, and earned rave reviews from critics worldwide.*

“Mass Effect is a tremendous property ripe for translation to the big screen,” said Thomas Tull, Chairman and CEO of Legendary Pictures. “Mass Effect is a prime example of the kind of source material we at Legendary like to develop; it has depth, compelling characters and an engaging back story. This coupled with Avi and Ari producing and the skills of a great team adapting the screenplay, are the start of turning this smash videogame based property into a successful feature film.”

“We are thrilled to be working with Legendary,” said producer Avi Arad. “EA and BioWare are terrific partners who have created a brilliant piece of fiction with a universe filled with amazing aliens and technology. More importantly, though, they created a parable whose conflicts mirror the ones we currently face in our own world. This story emphasizes the need for all cultures to learn to work together. All this magic is presented in a fast paced action-adventure that makes for the best kind of movie experience.”

“At BioWare, we’ve always thought of Mass Effect as having the depth, emotion and plot twists perfectly suited for an adaptation to a motion picture,” said Casey Hudson. “With Legendary and Avi and Ari Arad attached, we believe that the Mass Effect movie will be an extraordinary entertainment event that realizes our vision for the franchise and thrills fans.”

Mass Effect 2 is available on the Xbox 360® videogame and entertainment system and PC. Assets are available at info.ea.com. For more information on Mass Effect, go to http://masseffect.bioware.com/