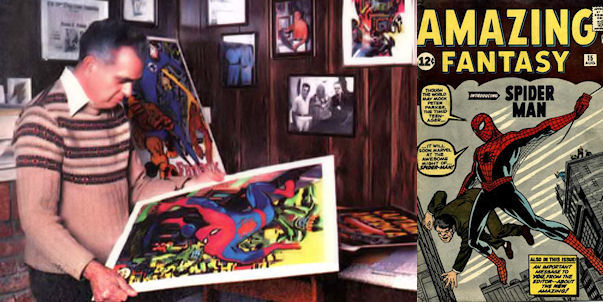 The children of legendary comic book artist Jack Kirby have sued Marvel to terminate copyrights to, and receive a share of profits from such lucrative comic creations as X-Men, Iron Man, Spider-Man, and The Incredible Hulk. The suit, follows a move back in September by Kirby’s estate which sent out 45 notices of termination to Marvel and owner the Walt Disney Co., as well as Sony, Universal, Fox and others, to recapture control of Kirby’s work.

In January, Marvel filed its own lawsuit, claiming the creations were “work-made-for-hire” and that Marvel was the real “author” of such works under the 1909 Copyright Act.

Here’s the dirt from THR,

The complaint seeks declaratory relief, including copyright termination and profits. It describes the backstory of Kirby’s creative period, particularly from 1958 to 1963, when Marvel existed in a tiny office with few employees and relied upon “freelancers to which they had little or no obligation.” Kirby disputes Marvel’s work-for-hire theory.

Because Kirby often worked in tandem with others, particularly Lee, the complaint is careful about what the estate believes it is entitled to control: “With respect to Co-Owned Kirby Works, as of the respective Termination Dates, Defendants will jointly own the copyrights to such works for their renewal terms: both Plaintiffs and Defendants will have the non-exclusive right to exploit such jointly owned copyrights…”

In other words, even though various studios currently have a license to produce movies such as “Spider-Man” (Sony) and “X-Men” (Fox), the estate’s court action could give it the ability to license competing versions. If it wins termination, that is. Disney and the other studios are sure to throw all of their superpower legal muscle at this fight.

The Kirby estate doesn’t state how much it thinks it’s owed, but any termination of copyrights could be worth tens of millions of dollars, if not more. Last year Disney bought Marvel for a whopping $4 billion.

One surprise in the lawsuit is an unexpected claim under the Lanham Act. The lawsuit targets two films, “The Incredible Hulk” released in 2008 and “X-Men Origins: Wolverine” released last year, as films that it claims were misrepresented in commercial advertising and promotion. The estate claims that Kirby was not properly identified as being the author or co-author of these works. The estate is seeking “up to three times the damages they sustained and will sustain,” which isn’t specifically identified, but could be significant. “Wolverine” made almost $375 million in worldwide gross.