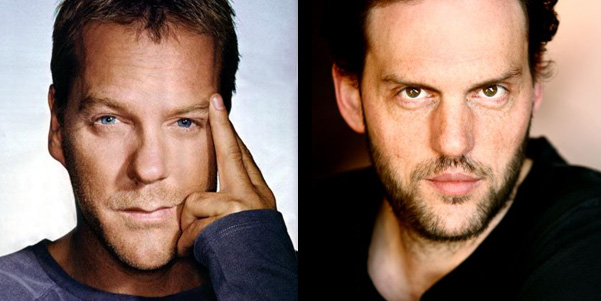 Can’t keep Jack Bauer off your television – Kiefer Sutherland (The Confession, 24) has signed on to star in the Fox pilot for Heroes creator Tim Kring’s new series, Touch. Sutherland, pictured above at left, plays a man whose autistic and mute son has the gift to “predict events before they happen.”

Sutherland is currently starring in Jason Miller’s That Championship Season on Broadway and will begin working on Touch this summer after the play’s run.

The latest addition to NBC’s Grimm pilot cast is Prison Break alum Silas Weir Mitchell (My Name is Earl, Burn Notice). Grimm has been called “a dark but fantastical cop drama about a world in which characters inspired by Grimm’s Fairy Tales exist.”

Mitchell, pictured above at right, will star opposite David Giuntoli, who plays Nick Burckhardt, a “good-looking detective who starts to see humans as  beast/animals and discovered that he has a legacy – to protect ‘human’” from these beasts.” Mitchell plays Eddie Monroe, (you guessed it, but there’s a twist!) “a reformed big bad wolf who has tamed his murderous instincts through a strict regimen of diet and Pilates.” These two make for an unlikely buddy cop pair, don’t they? Eddie Monroe begins to help Nick with his cases.

Grimm is a creation out of the heads of David Greenwalt (Angel, Profit) and Jim Kouf (Angel, Ghost Whisperer.) Adrian Pasdar (Heroes, Castle), who starred in Greenwalt’s dark and intriguing 1996 series Profit, comments that Grimm is “just as good [as Profit]. It’s amazing.”