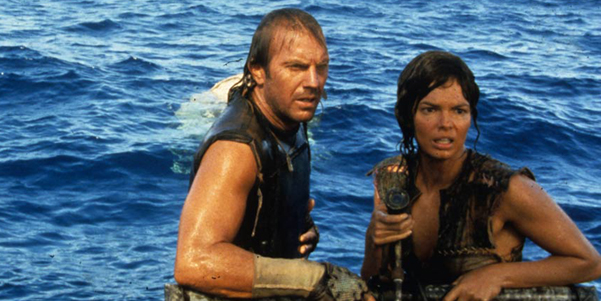 Kevin Costner is the eco-warrior of the day as he may have the solution for the continuously gushing oil spill in the Gulf. This disastrous leak resulted from the April 20th explosion and fire aboard British Petroleum’s Deepwater Horizon rig. Turns out that while Costner was working on his post-apocalyptic epic film,“Waterworld”, he was so inspired by his character’s invention to purify ocean water, he funded a team of scientists among which one was his own brother, Dan Costner, to invent a device to do so. Costner calls this technology “Ocean Therapy” and is working with the Army Corps of Engineers and British Petroleum to implement use of the some three-hundred prototypes he has at his disposal. They have tested six such devices to help with the clean-up effort in the Gulf. The leak is spewing over 210,000 gallons of oil into the water every day.

“Ocean Therapy” uses centrifuge technology to isolate the oil from contaminated water, resulting in 97% clean water. As a longtime environmentalist, Costner is happy to be able to contribute to the solution, but saddened by the reason:

“We’ve moved this to a technology that we know works, and has worked for a long time. It’s prepared to go out and solve problems, not talk about them. I just [am] really happy that the light of day has come to this, and I’m sad about why it is. But this is why it was developed, and like in anything that we face as a group, we all face it together.”

Costner cites the Exxon Valdez incident in Alaska as where the idea originated back in 1989. He partnered up with his brother to form Costner Industries Nevada Corp. that sought to “pursue various energy projects, including a non-chemical battery that could last fifteen years.” Costner spent $26 million dollars developing the “Ocean Therapy” oil separator machines. These prototype machines vary by capacity, the largest being able to clean water at 200 gallons per minute (a speed faster than the rate of the leak). Costner has had a license from the Department of Energy since 1993 for this invention and has attempted to promote for years. Looks like this is the time for his device to prove its worth! Check out this news piece on a demonstration of this sci-fi inspired technology:

BP has attempted to skim the oil, burn it on the surface, and cap it with a hood. Thus far, none of these solutions are working. The recent renewable resource solution of hair-filled booms has just been shot down today as engineers tested commercial booms soaked up more oil than the hair booms. Tar balls have been found washing up on the shores of the Florida keys this week, but the Coast Guard has determined that these balls are unrelated to the oil leak. A tendril of the oil slick has been spotted entering the counterclockwise eddy of the Loop Current that leads to the Gulf Stream. The National Oceanic and Atmospheric Administration hopes that the Loop Current will keep the oil contained for the now. NOAA has prepared a “virtual Incident Command Center” in St. Petersburg, Florida to manage the disaster. Meanwhile, the Gulf’s fishing industries, the area’s tourism, and dozens of underwater species are threatened by this disaster.