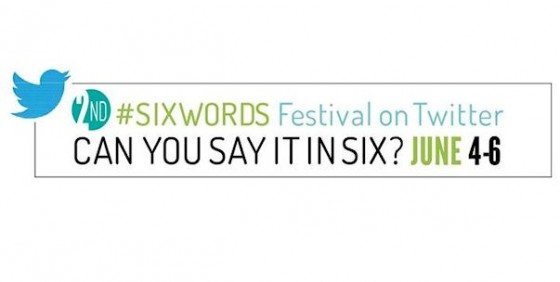 If you’re on Twitter, or even if you’re not, you may have heard of the Six Words Challenge. You know, “can you tell the story of your life in six words?” The first Six Words Festival was last September, and, true to the get-it-done-fast philosophy, the second Festival isn’t waiting for the anniversary; it starts tomorrow.

Several prompts will be issued, including one for aspiring sci-fi writers, to be judged by sci-fi icon George Takei and Rick Springfield, who along with his singing and acting credits is now a NY Times best-selling sci-fi author.  Favorite tweets will be included in a book to be published fall 2015.

Check out the general press release, followed by the sci-fi-specific one, and good luck! 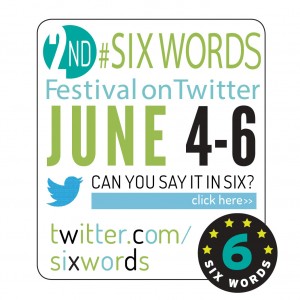 Welcome to our second Six-Word Festival on Twitter! From June 4-6, this virtual storytelling celebration will consist of Six-Word prompts and tweets in response. Celebrities will share their own stories in #sixwords, retweet favorites and choose daily winners. A number of the best #sixwords tweets will be in a new book of Six-Word Memoirs, out in fall 2015 from St. Martin’s Press.

Want to take part in the Six-Word Festival? It’s easy.
1. Follow @sixwords on Twitter
2. Check back here on the Six-Word Festival page for the full schedule, real-time tweets during the festival, daily editors’ favorites, as well as all the judges’ winners.
3. On June 4, 5, and 6 share your six-word responses to challenges posed by our amazing cast of celebrity tweeters and judges.
4. Download the Six-Word App for quick sixing on the go.

And here are the specifics for the sci-fi challenge:

Get Your Sci-Fi Fix In Six With George Takei!

Escape from reality and create your Sci-Fi fantasy in just Six Words. The future is here and yours to craft—whether your tales travel through time and space, or involve robots in supernatural odysseys, the possibilities are infinite! Here’s how and when you can join in:

George Takei (@GeorgeTakei) is best known for his role as Hikaru Sulu in Star Trek. This TV, film and stage actor is also an author and activist who is a social media powerhouse. His Six-Word challenge: “Write a #SciFi Story in #SixWords”