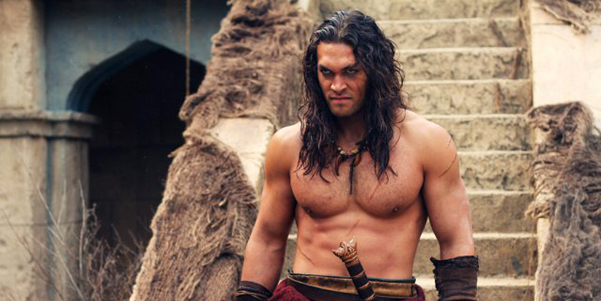 Conan: The Barbarian isn’t even in theaters yet (premieres August 19, 2011) and star Jason Momoa (Game of Thrones, Stargate: Atlantis) has great plans for his character. Momoa, who is already signed on for another Conan film, has become so entrenched in his role that he himself as written a script for the sequel.

“It will mostly be… It’s character-adapted, because I really want to get into more of the mythical creatures, you know?

We wanted to go there [in the first one], but having Clash of the Titans, and coming out against that, we wanted to put the budget into some other things. We just couldn’t hit… We couldn’t get to that level with […] the visual effects and stuff. […] I don’t want to give anything away, but we already have our Conan, really it’s about the villain, what that villain is going to extract from Conan, and where as an actor I want to go with Conan. You know, no one’s going to know what I want to do better than me.

We want to incorporate three different things, because obviously you don’t just want to do the [existing] story, because the fans already know it. You want to keep them on their toes. So, I think we have a good lock on it. Also, I feel it’s beautiful… How many actors get to go in there and go, “I’m part of the writing process?” and care that much about the character, because he is a fan himself? It’s great. You know some people go like, “It’s great, I’m going to be in my trailer.” I want to @#$%ing make a great Conan movie.”

We shall see if the studio takes and runs with the script that Momoa has written. Whether there will be a Conan 2 or not Momoa definitely is passionate about the role and his work in the film biz. The actor has more than just turned heads as Kahl Drogo in HBO’s Game of Thrones. I can’t wait to see him in Conan: The Barbarian!