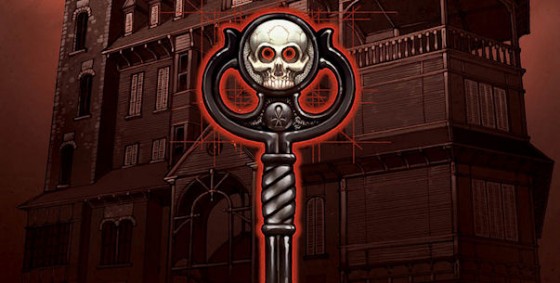 Cryptozoic Entertainment, developer and publisher of the World of Warcraft® Trading Card Game, is pleased to announce that the company has partnered with IDW Publishing to create an exciting new card game based on the Locke & Key comic series by award-winning author Joe Hill and artist Gabriel Rodriguez. Launching in 2012, Locke & Key: The Game will bring players inside this haunted world.

“We’re very excited to be able to team up with IDW, Joe Hill and Gabriel Rodriguez on Locke & Key: The Game. With the growing popularity of the Locke & Key comic series, we felt it would a great franchise around which to build a fun and compelling card game,” said Cory Jones, President and Chief Creative Officer at Cryptozoic Entertainment. “Locke & Key: The Game will contain a more than 150 cards, including specially designed ‘key’ cards based on the various powerful keys in the series. Once acquired, these special ‘key’ cards will empower players to unlock new strategies towards possible victory.”

“Locke & Key is one of IDW’s most highly acclaimed series and it’s a great opportunity for us to be able to extend the Locke & Key universe in to gaming through this collaboration with Cryptozoic,” said Ted Adams, IDW Chief Executive Officer and Publisher. Created by acclaimed suspense novelist and New York Times best-selling author Joe Hill (Horns, Heart-Shaped Box) and featuring astounding artwork from Gabriel Rodriguez, Locke & Key tells the tale of Keyhouse, an unlikely New England mansion, with magical keys and fantastic doors that transform all who dare to walk through them…and home to a hate-filled and relentless creature that will not rest until it forces open the most terrible door of them all.