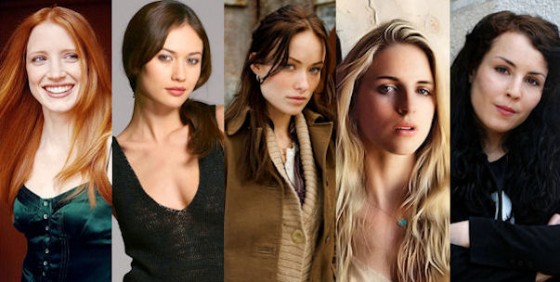 Back in March, we told you that Walt Disney Pictures hired Karl Gajdusek (Trespass) to rewrite William Monahan‘s (The Departed) draft of the script for the big-screen adaptation of Joseph Kosinski‘s graphic novel entitled Oblivion., and the project was also renamed from Oblivion to Horizons. Just two weeks after that report, Disney decided not to move forward with the adaptation at all, leaving Joseph Kosinski and Radical Publishing the ability to shop the project to other studios and producers.

In May, Universal Pictures picked up the film and Tom Cruise (Mission: Impossible – Ghost Protocol) signed on to star as “Jack, a man who lives in the clouds above Earth and heads to its surface to repair drones that essentially keep the planet safe from an alien race that has all but wiped out humanity.”

Now, Variety reports that Jessica Chastain (Wilde Salome), Olga Kurylenko (Empires of the Deep), Olivia Wilde (In Time), Brit Marling (Another Earth) and Noomi Rapace (Prometheus) are all testing this weekend to star opposite Cruise. The site also states that Universal is sticking with the Horizons title, rather than falling back to the original Oblivion.