HAVEN’s Nathan Talks to SciFi Mafia About Season 4, Plus TV Spots and a Clip 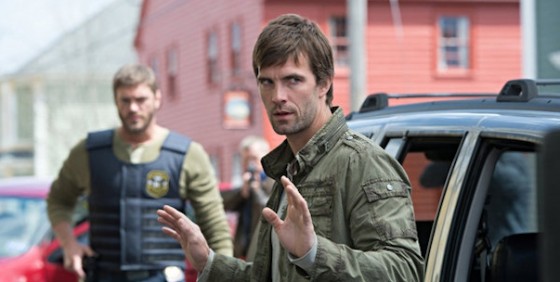 How excellent was last week’s Season 4 premiere of Haven? (Correct answer: Oh So Excellent, or in the alternative, It Was Completely Excellent). The new cast members fit in seamlessly, and although many of our favorites found themselves in new and very different situations, it was terrific to have them back on our screens.

As I said in my review, Lucas Bryant really knocked it out of the park with his portrayal of Nathan as devastated, destroyed, a shadow of his usual self. I spoke with him recently and asked him if things would be getting better for Nathan soon:

There are some happy moments definitely for Nathan, but sadly, they seem to be fleeting. You know that’s just the way it has got to go. When things start looking too good, you have to just smash it all to pieces, right? Especially in the first half of the season, Nathan’s outlook is pretty bleak, pretty dark. You learn in that opening episode what he has decided he needs to do and the deal that’s made about his short future. So, no, things aren’t looking too good there, but I will tell you that there may be very exciting lights at the end of that dark tunnel.

As we were at least hoping, if not expecting. They were shooting episode 11 of 13 when we spoke, so I also asked him if there were any favorite moments in this season so far.

Well there are a bunch of great bits coming up that I can’t tell you anything about, but I’m sure fans will probably be pretty into what develops midway through the season. Specifically for me I guess, a couple of episodes ago I got to play a wildly different version of Nathan. Something happens in town that’s – how do I put this? – that shakes up everyone’s reality, so yes; I got to explore a very different side of him, which was a blast. A much less reserved and much more effusive side of Nathan that I certainly didn’t see coming.

That is going to be SO much fun to see, can’t wait! But we’ll have plenty of Sad Nathan episodes to enjoy first, including, presumably, tonight’s. To prepare for the season, we have a “super teaser” TV spot, followed by a TV spot for tonight’s episode and a clip: