Haven Season 3 Will Have Even More Edge 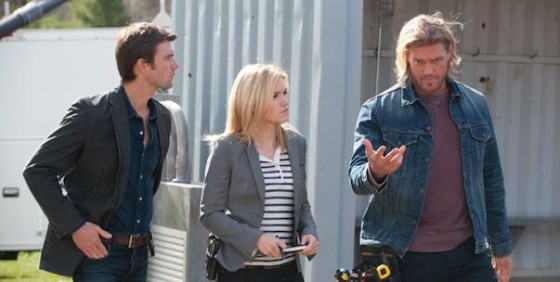 Some of the best news coming out of Syfy lately is the fact that Haven is returning for its third season on September 21, less than a month away. There is an atmosphere on the show, set in a small seaside town in Maine (no surprise, as it’s based on a novella by Stephen King), that combines with the exceptional cast chemistry and fantastically twisty plots to make it easily my favorite show on Syfy. You could say it has – sorry – an Edge.

Because it does. WWE superstar Edge (Adam Copeland) joined the show for a few guest appearances last season as Dwight, a “cleaner” of the aftermath of Troubled incidents, and now we hear from Syfy that he’ll be back for Season 3. It would be easy to suspect that this is stunt casting, but honestly, he’s a natural. The show has consistently excellent writing, but the actors still need to bring it, and Adam Copeland is terrific.

NEW YORK – August 22, 2012 – WWE Superstar Edge (aka Adam Copeland) will return to Syfy’s hit series Haven, appearing in multiple episodes of the show’s third season including the premiere, September 21 at 10PM ET/PT. WWE Superstar Edge will reprise his role of Dwight Hendrickson, a shrewd, longtime Haven resident and “Troubled” handyman who can truly handle anything, and often does, as the town’s “Cleaner.” A close ally of Nathan’s (Lucas Bryant), Dwight helps to cover up all of the town’s supernatural goings on and to keep Haven’s secrets hidden.

Season three of Haven picks up immediately following the events of the gripping season two finale with Audrey having been brutally kidnapped; Nathan warned against pursuing a romantic relationship with Audrey; and Duke (Eric Balfour) seemingly engaged in a fight to the death with Nathan after he discovers his family lineage is to kill Haven citizens with troubles.

Syfy is a media destination for imagination-based entertainment. With year round acclaimed original series, events, blockbuster movies, classic science fiction and fantasy programming, a dynamic Web site (www.Syfy.com) and a portfolio of adjacent business (Syfy Ventures), Syfy is a passport to limitless possibilities. Originally launched in 1992 as SCI FI Channel, and currently in more than 98 million homes, Syfy is a network of NBCUniversal, one of the world’s leading media and entertainment companies. (Syfy. Imagine greater.)

Entertainment One Ltd. (LSE:ETO) is a leading international entertainment company that specializes in the acquisition, production and distribution of film and television content. The company’s comprehensive network extends around the globe including Canada, the U.S., the UK, Ireland, Benelux, France, Germany, Scandinavia, Australia, New Zealand and South Africa. Through established Entertainment and Distribution divisions, the company provides extensive expertise in film distribution, television and music production, family programming and merchandising and licensing. Its current rights library is exploited across all media formats and includes more than 24,000 film and television titles, 2,700 hours of television programming and 45,000 music tracks.

Universal Networks International is a division of NBCUniversal, one of the world’s leading media and entertainment companies in the development, production, and marketing of entertainment, news, and information to a global audience. Comcast Corporation owns a controlling 51% interest in NBCUniversal, with GE holding a 49% stake.