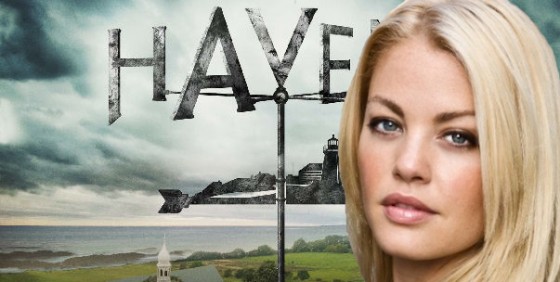 Oh-so-excellent Syfy series Haven is back in Nova Scotia in production on Season 3, and they have a new castmate. She is Bree Williamson, best known as Jessica Buchanan on daytime soap One Life to Live. She’ll be playing Claire, a … mental cleaner?

“She is Haven‘s resident shrink,” writers Lilla and Nora Zuckerman revealed Sunday on WormholeRiders.net’s BlogTalk Radio podcast. “We talk about [Adam “Edge” Copeland’s character] Dwight being the ‘cleaner,’ and [Williamson’s] Claire is in a way the ‘mental cleaner.’” She’ll be helping people cope with the Troubles and the havoc they wreak in Havenites’ lives.

Ms. Williamson herself confirmed the news on Twitter: “So I guess I can tell you guys now.I’m going to be on Haven this season! I’m so excited everyone has been awesome. Expect fun tweets#haven3″

New additions to my favorite shows make me nervous, but last year’s additions of Other Audrey and Evi both calmed my nerves, as they worked in well and were terrific. I trust these writers completely and they have never let me down. Bring on Season 3!